This is probably the darkest comedy you will see this year. Or any other year. Also, the most fiercely original and unflinching. JudgeMental Hai Kya (whatever that means) is not for the squeamish or the tender-hearted. It is the opposite of a rom-com. Perhaps a romp-com, as it takes us one one wild ride through the minds of two of the craziest protagonists you will meet on this side of Bonnie and Clyde. 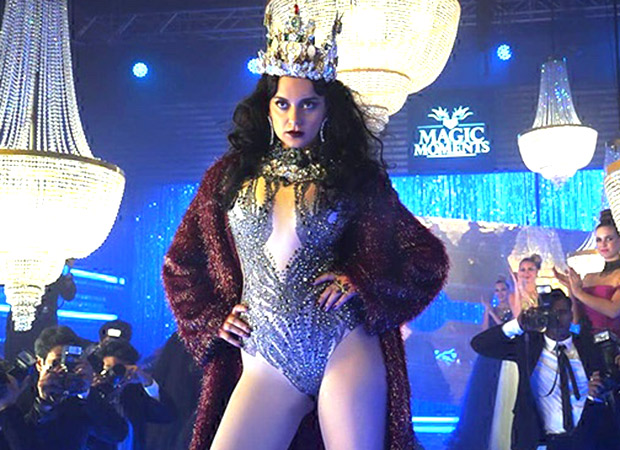 Bobby, that’s Kangana Ranaut playing what looks like a defiantly constructed fictional image of the intrepid avatar she assumes in real life, a troubled soul, if ever there was one. The feel-anything-but-good film begins with Bobby’s parents plunging to their death during Holi. You get the feeling the writer and the director were sold on the visual of two figures plunging to the ground in a swirl of dizzying colours. To be sure, the visual palate is often showy, exhibitionistic and intended to create a splash of embarrassingly gaudy colours with feelings to match. That goes for Kangana Ranaut’s dressing sense and hairstyle also.

Everything here is meant to shock. Perhaps, in the way the leading lady does in real life. Indeed, much of the heroine’s erratic behaviour could be conveniently attributed to the actress’ real-life conduct. And that’s the worst service you can do to Kanika Dhillon’s darkly provocative screenplay where anything can happen, because, like I said, we are meant to undertake a journey with two of the most psychologically disturbed criminal minds to have ever posed as ‘Hero’ and ‘Heroine’ in Hindi cinema.

While giving away the plot may invite the wrath of Kangana Ranaut’s alert and aggressive admirers, not giving away the plot is not one of Ranaut’s creepy character Bobby’s USPs. Bobby is crazy and not shy of showing it. In the way she stalks her tenants Keshav (Rajkummar Rao) and his wife (the pretty Amyra Dastur), Kangana displays a rare resoluteness and fearlessness in her screen presence. She doesn’t care how she looks, and who looks, as long as she is doing what comes naturally to her. Playing what looks like a schizophrenic character, this is the trickiest role of Kangana’s career and she is up to the challenge.

Rajkummar Rao playing her raven Ravanesque multiple-disordered personality will shock you with his artillery of raw and rippling histrionics. Like much that goes in this nippy snappy work of surrealistic art, Rao’s character is unpredictable to the end. The Ramayan references that are plucked out of their original habitat taken to London to nourish and nurture the narrative’s noire aspirations, didn’t really work for me. But then, I saw the mythological references as part of the madness that inflicts the film from first frame to last. Then, everything works, because nothing in this film is meant to be normal.

JudgemeMental Hai Kya dares you to get judgmental about its heroine. As Kangana   manoeuvres through the maddest role of her career, she is joined by some fine actors. Specially enjoyable are Hussain Dalaal as her slavish boyfriend who wants sex but gets, in Kapil Sharma’s works babajee ka thullu, and the ever-reliable Jimmy Sheirgill who for reasons unknown, gets attracted to the most dangerous woman on the planet.

Kangana Ranaut’s Bobby or Rajkummar Rao’s Keshav are not people you would like to meet socially. But this film telling their crazy quirky combined karmic teerth has teeth and claws.

Also Read: “Kangana is one of the finest talents we have”, Rajkummar Rao on Kangana Ranaut and Judgementall Hai Kya