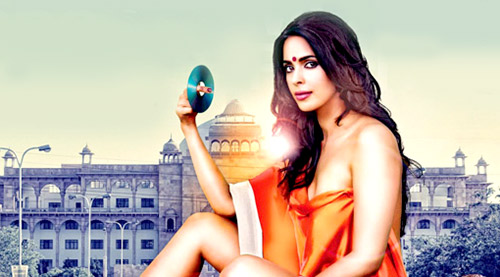 The pot-bellied grotesque politician from Rajasthan used to be the face of politics in India at a time when the Chautalas were doing their ghotalas. With a new crop of smarter netas, hopefully less susceptible to corruption, coming in the era of the bad-ass politician is blessedly behind us.

And that's precisely why producer-director K C Bokadia's Dirty look at the filth in Indian politics is hopelessly outdated. This is the murky Machiavellian world of Prakash Jha's politicians stuck in a time-warp. Denuded of all intellectual sensibility. It harks back to the 1970s when netajis in our films were so caricatural they belonged to cartoons in vernacular newspapers.

Om Puri plays his role of the lecherous politician with lip-smacking relish. Like a diabetic man whose wife is away to her maike while he gorges on forbidden junk food.

This is junk food for the audience that believes cinema is about seductive heroines, lascivious villains, loud over-punctuated background music, camera angles and cinematography that seem to adhere to the gimmicky treatment, like an annoying sniveling child clinging to its mother's bosom.

Bokadia's cameraman Paneer Selvam seems to know exactly what the director wants. Fleets of netajis' cars are shot in high-speed to save time...or is it to make the frames look more exciting than they actually are? God knows, this film desperately needs a reason to survive its lengthy playing-time. Actors of the calibre of Atul Kulkarni and Sushant Singh grapple with a script and lines that are so outrageously didactic they sound like messages written on the walls of the loo at a government office visited week after week by tired pensioners.

Curiously, Kulkarni and Singh play honest cops, brothers named Nischay and Nirbhayâ€¦get it? They work together to eradicate the dirt from politics. But who's going to clean out Indian mainstream cinema from the lingering legacy of a distastefully pungent past that films of this kind stubbornly cling to?

Reduced to the indignity of playing a lecherous over-libidinous politician who has the hots for an ambitious siren, Om Puri does what he can, given the constraints of a corny script that relies on sleaze and shock value to get our attention. Other talented actors like Naseeruddin Shah (playing an honest journalist stuck with a daughter whom the politicians kidnap), Anupam Kher (playing a straight-faced honest CBI officer), and Ashutosh Rana (very effective as Om Puri's right-hand man) seem to be in it for fun.

Or was it the pay cheque? Nothing that we see in Dirty Politics justifies the presence of these talented actors.


A very poorly executed film that makes you feel sorry for the body-politic of the nation. Surely things are not so bad in politics?