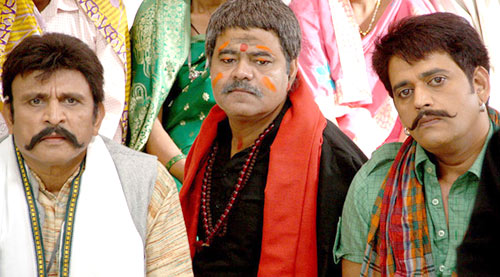 This can happen only in India...or maybe in a neighbouring country.


What do you do when you catch your wife getting cozy with the village stud (well, okay not quite the stud...but chalega). You accuse him of raping... no, not your wife but a buffalo.


First-time director Vinod Kapri's film picks up a true stranger-than-porn-fiction incident and weaves it into ticklish puckish parodic raunchy pastiche filled with phallic and mammary innuendos that do not seem out of place when seen to reflect a social structure in turmoil.


Morality is skewed in Kapri's capricious world. He twists and turns through a lascivious labyrinth with a reasonable amount of self-discipline. You do feel the film could have been less breathy in its excitement over the intrinsic luridness of the material. The scatological jokes are way too broad. Very often the narrative seems to wallow in its own joke. Quite frequently the actors seem to be chuckling inwardly at a joke that doesn't get translated on screen.


Screwing with a buffalo, indeed!


Ironing out the rough edges are the performances. Annu Kapoor and Ravi Kissan are in fine form as master and slave, bringing to the table a hefty brew of backchat and buffoonery. Rahul Bagga as the victim of the cuckolded tyrant's ire provides that much-needed spot of innocence in the perverse planet of the plot. This actor deserves a lot more.


Miss Tanakpur is both a scathing indictment and a savage satire on the chaos, often calamitous, that is rural India. Vinod Kapri dares the unthinkable in his debut film. For that, if nothing else, he deserves to be congratulated.