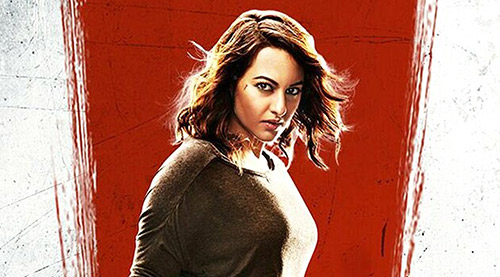 The biggest takeaway from this brutal depiction of police atrocity is the cop Rane. As played by Anurag Akshyap the character acquires sharp spiky edges that pierce the plot and penetrate into a region far deeper than where director Murugadoss rests his case.

Don’t get him wrong. Murugadoss means well. Akira  takes up the cause of women's empowerment...But only on a superficial level. When Akira is still a child (which is to say, she is played by little Mishiekka Arora) she takes revenge on  a, acid thrower by....well, learning karate (prompted by her inspiring mute dad) and throwing acid back on the guy who did it.

As simple as that! If only life was as uncomplicated!! As though to make up for the paucity of clutter and plain substantiality  in the first half, Akira suffers a severe midlife crisis and goes into spasms of tortuous torture scenes meant to show Akira reaching breaking point before she explodes.

Instead of Sonakshi's Akira exploding on screen the plot crumbles and falls apart under the weight of the gross violence. Murugadoss excels at showing his female protagonists being brutalized. Iron rods are a favourite weapon to torture subjugate and almost lobotomize spirited women. In Ghajini Asin was bludgeoned to death because she was too sunshiny  for the villain to bear. In Akira Sonakshi sulks ceaselessly (troubled childhood,super-troubled adulthood), until the villainous cop and his hysterical deputies, accomplices in law-sanctioned crime (one of whom at one point falls to the ground whimpering as Kashyap looks alarmed and embarrassed)  take her out to  a forest and decide to eliminate her because...well, they got the wrong girl.

Ditto the film. It got the right girl—Sonakshi is sufficiently restrained and implosive—but it put her in impossibly sadistic situations. The scenes of her torture in a mental asylum, run by a doctor who looks like a pimp at a run-down brothel, are prolonged and unnecessary. If only the narrative, so gripping to begin with, had not grown flabby as it progressed.

Kashyap's diabolic cop's performance holds the film together. He had played a dirty lawman in  his own film Ugly. He  builds on the earlier  cop's role and hones the art of lawlessness to such an extent that we miss him whenever he isn't around in this film. Sadly the actors playing his khaki-wearing colleagues emerge as caricatures of desperate criminality. You can take Murugadoss out of the South, but you can't take the South out of him.

The other very interesting character is that of a righteous pregnant cop Rabia, played laconically by Konkona Sen-Sharma. She imparts a sort of stubborn idealism to  her character , compounded by her heavily immobile state. Tragically her slow painful physical movement becomes a metaphor for the plodding righteousness  of  the script.

Though well-intended Akira tends to slow  down its own virtuous journey with implausible roadblocks including a mentally disturbed eunuch  who helps Akira Sharma escape from the mental asylum where the villains lock her away while her family looks the other way. Oh yes, there is a sympathetic lover played by Amit Sadh who looks on helplessly as the villains wreck hectic havoc on the heroine.

To mend the holes in the plot Murugadoss stuffs the storytelling with messages on the physically and mentally disabled and on police brutality.While the sermons don't get shrill the smothered cries of 'Enough!' can be heard from miles away.

That's  us screaming in protest, as Sonakshi Sinha tries bravely to make her tortured character braver than what the story writers allow her to be. Akira is a film that could have gone very far, if only the theme of women’s empowerment had not been overpowered by the Murugadoss school of villainous barbarism which does not discriminate between man and woman.

Is that what  the neo-feminists mean by equality of the sexes?