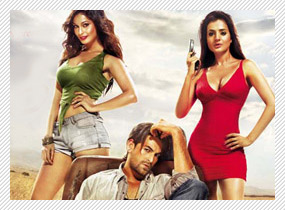 There are two ways of doing a full-on masala film. You either turn it on its head and poke fun at ridiculous cinematic conventions. Or you treat the stereotypical characters and sacred cows of our cinema with full seriousness.

Shortcut Romeo takes the midway route. It seems so full of the old-world formulistic flavour and the stench of the familiar that parts of the pulsating aggressive storytelling actually feel like a spoof.

So we have the film's unfaithful wife Monica (Amisha Patel) and her slimy lover (Jatin Garewal) making out in a golf turf. Why any affluent couple would use the grass to manoeuvre their itching ass when they could afford the poshest of duplex to do the 'needf..k' is beyond logical explanation.

And then Slimy Lover tells Unfaithful Wife, "First time when you do it (cheat in a marriage) you feel bad. Then it becomes your style."

But please don't laugh. First-time Hindi director Susi Ganesan is dead serious. The film shot at the speed of sound, Himesh Reshammiya's sound, is filled with bizarre twists and turns. It's basically the story of a woman who cheats on a saintly tycoon of a husband(effectively played by Rajesh Shringapure) who has a massive portrait of Rabindranath Tagore in his bedroom, and a cheesy blackmailer named Suraj who believes in taking risky short-cuts to get rich.

This is not the first film about a cheating wife and a blackmailer. Reena Roy and Naseeruddin Shah had done the roles with heart-stopping tension in Bezubaan. Shortcut Romeo scores in the way the plot paces out its drama in the ongoing friction between the fornicating wife and the avaricious blackmailer.

Neil Nitin Mukesh plays the cheesy go-getter with a schemer's delight. His eyes glint when he talks of teasing more money out of Monica. He drools when she transfers cash into his trashy life. Alas, some of the narrative's display of the protagonist's excessive hedonism is just an excuse for African tourism. The Kenyan expedition reads like a botched-up touristic brochure with Black African women performing item songs to the tune of Sheila ki jawani and Chikni chameli.

Bad idea, Mr Ganesan. Even worse is the director himself showing up in the second-half as the cheated husband's detective-friend. Susi Ganesan's accent is so thick it slices the gamboling narration into smithereens. At least for a while. But then again the film gathers momentum towards the end-game .The finale is a breathless whammy with Neil making a run for his freedom, quite literally, with the narrative panting behind him.

Shortcut Romeo is redeemed by a strong message on today's 20-something's yearning for materialism. And when our Shortcut Romeo finds his short-skirt Juliet (Puja Gupta, pretty) there is a delicious irony attached to the association. The film's most vivid interludes go back to Neil's childhood to show how he learnt to be corrupt, acquisitive, and inquisitive, at a tender age. Some of the action sequences with Neil, specially one key fight with African tribals, are first-rate. But then the songs-oh my God!-they pop up at the most inopportune moments like Amisha Patel's eloquent twin assets. I mean her eyes, of course.

In spite of its massive flaws (including the cheesy dialogues) Susi Ganesan's stylish shocker of a thriller manages to stay constantly one step ahead of the audience. A coolly crafted cat-and-mouse game Shortcut Romeo finds Neil giving grit to the gripping goings-on. The last half-hour is a knock-out.

But the overall product could have been far less retrogradatory in tone. Nonetheless enjoyable while it lasts.