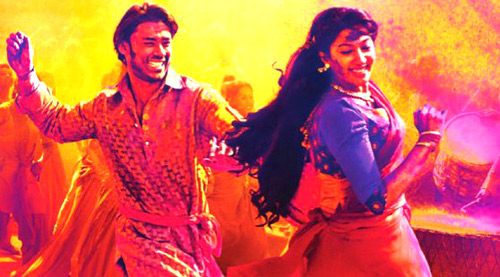 Shakespeare lives! It was 'Hamlet' in Kashmir last week. It's 'Romeo & Juliet' in Agra this week. Wow, Bharat Darshan with the Bard.


Small-town love stories with their own unique colours, flavours, aromas and adaas hold a peculiar charm for us. Of late, there have been many small-town takes on 'Romeo & Juliet'. Anand L. Rai's Raanjhaana, Sanjay Leela Bhansali's Ram Leela and Manish Tiwari's underrated Issaq come to mind immediately.


Jigariyaa about a confectioner (repeatedly called halwaai in the film)'s son's eruption of unbridled passion for a zamindar's daughter has a sweet tender ricocheting charm of its own. The bustling Agra ambiance is beautifully bridled and unleashed to bring out the urgency of a desperate, irrational love. The courtship is filled with smile-a-while gusto. And as we watch the love come done and then undone, we can't help getting involved with these two headstrong wannabe Romeo and Juliet of Agra.


Innka kya karen? Is the thought I came away with. Director Raj Purohit had earlier made a completely contrasting film called Sixteen which was a deftly told coming-of-age story about a bunch of urban 16-year olds. Here Purohit goes completely rustic and raw with a plot that transports the love birds to the era of Govinda in the 1980s. The ambiance is very craftily insinuated into the love story. The film has some brilliant camerawork by Sriram Ganpathy who captures the gulli and mohallah culture with warmth and vividness.


You can almost smell the samosas frying in the roadside kadhai.


The lead pair do the rest. While newcomer Cherry possesses a certain unvarnished awkwardness that makes her Radha seem endearingly vulnerable, it is Harshvardhan who as the galli ka chichora chora Shamu pitches in a playfully pungent performance filled with childlike mischief and yet underlined by a sexual aggression. I liked Harsh's Romeo better than both Ranveer Singh's over-the-top and Dhanush's cocksure Romeos in earlier takes on the tragic play.


The supporting cast is well informed. Veterans Virendra Saxena and K K Raina play the hero and heroine's father's respectively. Not much that can go wrong here.


Jigariyaa has its share of flaws to reckon with. For one it doesn't really add anything to Shakespeare. But then it doesn't take away anything substantial from the source-material either. The music too adds nothing to the romance. That's a pity. If music is the food of love, then this film definitely needed some nourishment.


On the plus side director Purohit knows his characters' inner world and how to connect it to the bustling ambiance. The lovers seem fatally clueless about the ground-reality. Luckily the director knows his job. Jigariyaa is splashy flamboyant, colourful, earthy take on Romeo & Juliet. The film gives us an impressively intuitive debutant Harsh Vardhan who seems to know more about love in Agra than tragedy in Shakespeare.


Star-crossed love against the backdrop of the Taj Mahal played out a high octave. Yes, it works.