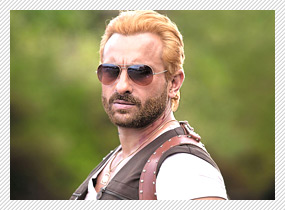 Not taking into account the expression-less 'actors' who have infested Hindi films from time immemorial, zombies are a relatively new phenomenon in Hindi cinema. We did have a zombie film some weeks ago which, like most characters in films of that genre, died a swift death. Forget that.


Go Goa Gone is a savagely funny take on the mythic cult of zombies. Since we are new to the genre there are sly footnotes about them. Characters in the course of their casual and quite corny conversations tell us plenty about Zombie folklore. That zombies enjoy eating human flesh, that they cannot run fast and most of all, zombies are actually dead people.


Working backwards on the premise of heroes shooting the dead, the co-directors have fashioned a fiercely funny fable filled with loads of innocuous innuendos and rumbustious scare attacks that never quite reach the stage of stomach-churning gore-o-logy (to invent a term, and why not since this film is about inventive creation).


Go Goa Gone can be seen as a brutal burlesque of the horror genre. Scenes of ghouls/zombies chasing our puny heroes through the Goan foliage are more satirical than scary. This innovative ode to terror moves at a quirky yet measured pace, gamboling quickly from one well-written scene of mock-terror to another without losing track of the film's ultimate 'bro-mantic' purpose.


For starters, the three heroes Kunal Khemu, Vir Das and the quietly effective Anand Tiwari who travel to Goa for fun frolic and, ahem the fraulein (if you'll excuse my German) looks like cocky offshoots of the trio from Farhan Akhtar's Dil Chahta Hai. Interestingly, one of Farhan's protagonists Saif Ali Khan here transforms into a blonde Russian zombie slayer named Boris whose accent keeps slipping off. And that's fine because Boris is not really Russian.

Ha ha. And this is not scary movie. Not really. Ha ha again. The principal actors are fully in-sync with the zany mood. Saif as a pseudo-Russian zombie hunter gives a performance to 'dye' for.


The laughs flow with energetic gusto melting into a tide of spooky gore without creating a genre-confounding mess. Kunal Khemu and Sita Menon's Hindi dialogues catch the fervor of the tongue-in-cheek words cheekily. Here is one film that doesn't lose its way in translation. Though the characters 'think' in English (Hardik, indeed!) and although the whole concept of a zombie flick is very B-grade off-mainstream Hollywood, the hair-raising hijinks manage to stay relatively sleaze-free.


Peppery and with a pinch of 'assault', the performances are pitched at just the right flavour of fright. All the three main actors have fun with their parts. But it is Kunal Khemu who seems the most at ease playing a synthesis of the slimy and the slippery without falling out of character.


A true gem of an actor, why is Khemu not given more interesting work to do? Saif's star turn as the 'Russian' sharpshooter is understandably self-mocking in tone. Saif's character is in keeping with the film. You really can't take the terror template seriously. And yet you get the uneasy feeling that the joke is on us.


A zombie fiesta that's savagely funny and surreptitiously scary, who but the co-directors of the genre-defying Shor in The City could convert the kookie content into an experience of a 'laugh'-time!


Oh yes, there's the mandatory glam-quotient in the figure of Puja Gupta. In her presence Hardik, giggle, gets really excited.


Go for Go Goa Gone. It's a stress buster with balls nerves and chutzpah.

Take style cues from Kangana Ranaut on how…