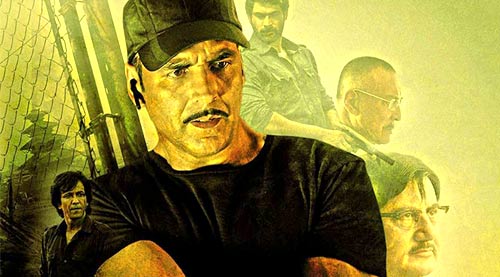 Don't move! The concept of the edge-of-the-seat thriller seems to have been invented for Neeraj Pandey's enormously engaging take on international terrorism. It takes guts to make a film which calls a spade a spade...Or Pakistan the hub of terrorism in the Asian subcontinent.


Neeeraj Pandey who has already proved himself to be a riveting raconteur with A Wednesday and Special 26 goes for the kill. This is his bravest and most epic effort yet.


With Baby Pandey immediately and irreversibly joins the ranks of the finest contemporary filmmakers of our times. Even if -God forbid-Pandey were to make disappointing films after Baby he would still be remembered forever by posterity for giving Indian cinema one of its most solidly-constructed cat-and-mouse thrillers in living memory.


Outwardly Baby with its theme of a bunch of bravehearts apprehending international terrorists at the risk of their own lives and their family's wellbeing, has nothing to offer that we haven't seen in several films in the counter-terror genre before. What places Baby far above the routine thrillers is its refreshing lack of circumvention in the storytelling.


Straightaway Pandey's film takes us into the life of the counter-terrorist Ajay (Akshay Kumar) as he grapples to locate a colleague who has been betrayed by one of their own and taken hostage by terrorists.


We have seen such agile dramatic situations in any number of Ajay Devgn, Sunny Deol and Akshay Kumar starrers. Immediately, we sense the difference. In Baby there is a palpable predilection for building unbearably suspenseful action sequences without losing the essential authenticity of the situation. All through the riveting drama, Ajay and his team (Tapsee Pannu, Rana Daggubati and other splendidly in-character actors who show up with him in different sections of the narrative) push the envelope of counter-terrorism without toppling into the abyss of self-congratulation.


No one has to tell us. We sense we are in the midst of a very important docu-drama on the violence of our times. A part of the film's edifying mood of bridled energy comes from Akshay Kumar's screen presence. He is in control, powerful and effective without throwing his muscles around the screen to prove his heroic stature.


One of the film's most interesting subtext is its attitude to heroism and machismo. When we see the hero in Baby conquer the plunderers, we don't see the routine posturing that screen heroism is always accompanied by. Ajay and his team are doing a job. They want to do it as well as any professional. The difference lies in the mortality level: this hero and his team could get killed at any time. And you know what? They don't care!


I wish Akshay's home life had been given a little more prominence. The film seems to eschew emotional bonding as a sign of weakness. Men like Ajay who have a country to save are best spared from the responsibilities of householders.

"Bas, mar mat jaana (just don't die on me," Akshay's screen wife (Madhurima Tuli) tells him, as though he were her smart-phone that she's compulsively attached to.


Neeraj Pandey keeps the proceedings tightly-wound, and yet we never feel the weight of the epic plot as it coils and recoils through a labyrinth of subverted idealism and crushed diabolism. The narrative is structured as a spiral of dread, doom and a kind of romantic hope of heroic redemption from the cesspool of terror-violence that grips the world.


Though nothing in the film's design suggests any conscious attempt to create a mood-specific thriller, the film keeps us spellbound from first frame to last. Yes, the airport climax where our heroes (standing ovation for them is in order) make their gateway from a middle-eastern country seems inspired by Ben Affleck's Argo. No harm in that...Creativity is never self-generated. In that sense there is a disturbingly thin line between artistic creation and terror-destruction.


Helming, navigating and controlling this bridled exposition on anarchy is Akshay Kumar with his career's best performance. His interpretation of an unsung hero's stubborn determination to rescue the world from chaos is mature and restrained, even when pitched against veteran actors with a formidable history of one-upmanship. Baby immediately puts Akshay Kumar above all the other jaded superstars of Bollywood. Watch him in the dexterously designed sequence where he exchanges ideological barbs with a terrorist Taufeeq (Jamal Khan). Akshay is not playing this role for applause. Instinctively grasping the enormity of what is being said in the film about global unrest, Akshay pins down his character, constructs a sensible life for it that transcends the line of duty.


Watch out for the solid supporting performances. Each actor even in the smallest of role knows he is part of a work that attempts to project the grim reality of our violence-ridden world without losing the inherent cinematic quality in the narration. In various sections of the film Danny Denzongpa, Sushant Sugh, Tapsee Pannu (as a desi Lara Croft, she is a delight), K K Menon and Anupam Kher appear to excel without trying to. Rashid Raz as the rabble-rousing Pakistani radical leader with his eyeball-rolling act may seem over the top. But then whoever said religious fundamentalists were controlled in their emotions?


What could have been avoided is the over-punctuated background score by Sunjoy Choudhary which tries to pound every scene to a pulp. If the narrative escapes from the assault on the soundtrack it's because the timely plot gives us no room to crib over trespasses. There is so much to, and so little time....With Baby Neeraj Pandey has evolved as one of the most skillful storytellers of our times. His plot, a hotbed of international intrigue, takes us on an unforgettable journey across cultures countries and continents.


Pandey gets immense support from his technicians. Sudeep Chatterjee shoots every nook of the locations as though it were the end of the world. There is a throbbing urgency to every sequence. The editing (Sree Narayan Singh) does away with punctuation marks to create a seamless world where danger lurks in every corner and only the brave are allowed to survive.


Neeraj Pandey whips up a storm of gripping action tempered with a refreshing twist of sobriety. Baby is one helluva rollercoaster ride. Miss it at your own risk.