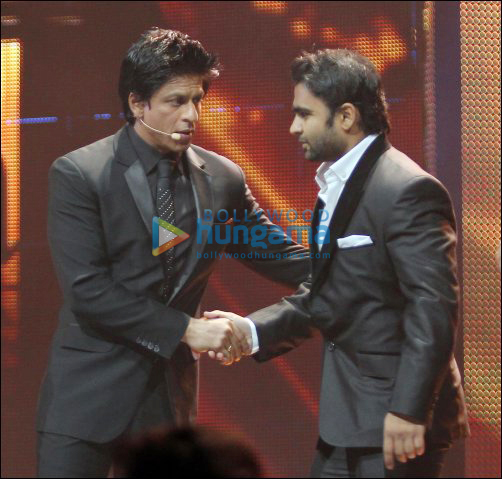 After an impressive showcase at the 64th Cannes Film Festival earlier this year, the high-octane action thriller
Aazaan made a prominent debut at the recently concluded The International Indian Film Academy (IIFA) Awards in Toronto with a flurry of activities. The showcase of the film and the introduction of debutant actor Sachiin Joshi was done by none other than the Badshah of Bollywood Shah Rukh Khan on this international platform.

Sachiin Joshi walked the Green Carpet at the IIFA Awards ceremony with friends from the film industry and later at the award function was introduced to the film fraternity and media by Shah Rukh Khan himself.


In an unprecedented gesture, Shah Rukh Khan called the debutant on stage and said, "IIFA is all about showcasing Indian films on an international arena and so is this new film, Aazaan, which is going to hit the marquee soon. I would like to introduce you to the film's hero, Sachiin Joshi!"


Aazaan is the first ever-Indian film that showcased its first look at the iconic Majestic Beach in Cannes, which saw an outstanding response leaving international dignitaries and key media personnel impressed. The lead actors Sachiin Joshi and Candice Boucher also sashayed down the Red Carpet at Cannes!


At IIFA, the first theatrical trailer of Aazaan was showcased exclusively at the premiere of the comic caper Double Dhamaal on the opening night. The action packed trailer created immense buzz amongst the who's who of the film industry.

The three-day IIFA extravaganza also witnessed a host of other activities by the Aazaan team. On the second day, the first exclusive music preview of Aazaan was showcased at the IIFA ROCKS event where music director duo Salim-Sulaiman performed LIVE to a medley of three songs from the movie along with a host of dancers from the Shiamak Davar Institute of Performing Arts. These songs were: 'Aafreen', 'Bismillah' and 'Khuda Ke Liye.' The pulsating yet poignant music of Aazaan had the audience captivated.


Post the IIFA Awards on the third day; the after party was co-hosted by Aazaan, which was attended by the who's who of the Indian film industry like Genelia D'Souza, Rishi Kapoor, Sajid Nadiadwala, Subhash Ghai, Randhir Kapoor, Rajiv Kapoor and Boney Kapoor amongst others.

Speaking about showcasing Aazaan in Toronto, Sachiin Joshi said, "Aazaan has been intelligently scripted keeping in mind the nuances of a biological warfare and has a mix of intense action and dangerous stunts. Its soulful and eclectic music by ace music directors Salim-Sulaiman is spellbinding. I was very excited to be in Toronto for IIFA to showcase our debut film Aazaan to yet another important international market after Cannes. It was a great honour for me to be introduced to the film fraternity and the international media by none other that the king of Bollywood Shah Rukh Khan."


The movie is all set to release across theaters worldwide in September this year. With yet another international showcase, Aazaan is sure going places!