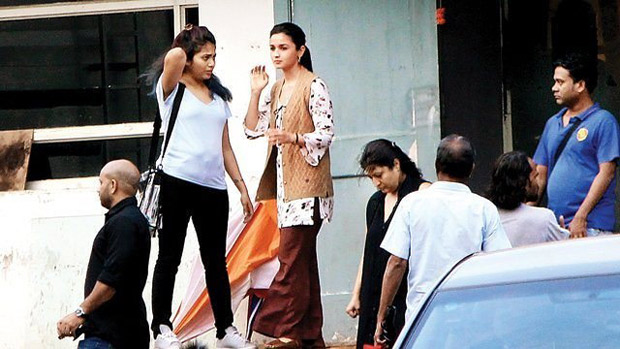 Alia Bhatt is known for her unconventional choice of roles and when she decided to go ahead with the woman-centric Raazi, it did not come as a surprise. However, what left us intrigued was the recent look the actress spotted whilst shooting for the film.

Earlier we had mentioned that Raazi, which is ideally set in Kashmir, shifted its shooting location from the Valley to Mumbai where a set has been erected for the same. Now, Alia Bhatt was seen sporting a Jane look in palazzo pants, kurta and a jacket. The film will have the actress playing the role of a Kashmiri spy married to a Pakistani military officer played by Vicky Kaushal. For the same, Alia has decided to go de-glam like the way she did for Highway and Udta Punjab.

On the other hand, based on the book Calling Sehmat by Harinder Sikka, Raazi is set in the 70s and talks about the pre Indo-Pak war condition wherein one woman decides to pass on important intelligence information to the Indian military services.  Sharing details such as war plans, she single handedly tries to bring down the Pakistani army with her smart tactics.

Directed by Meghna Gulzar, Raazi is co-produced by Karan Johar under the banner Dharma Productions in association with Junglee Pictures.