Akshay Kumar starrer Sooryavanshi is one of the most awaited films of the year and marks the entry of the third cop from Rohit Shetty’s cop universe. People have been awaiting the film ever since Akshay Kumar appeared as Veer Sooryavanshi in the 2018 film Simmba starring Ranveer Singh. The trailer of the film was launched today at a grand event in Mumbai in the presence of actors Akshay Kumar, Katrina Kaif, Ranveer Singh, Ajay Devgn, director Rohit Shetty, and producer Karan Johar. 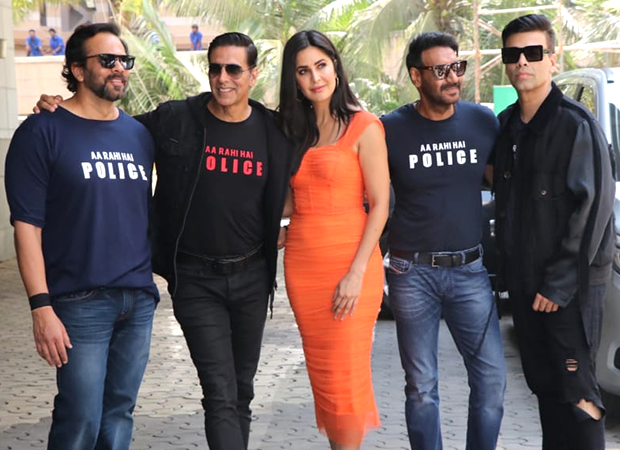 At the trailer launch, an overwhelmed Akshay Kumar said, "I have made 135 films and for the first time I am watching such a huge crowd. Rohit has made a fabulous movie. I hope the audience will like it. Ajay and I started our careers together and we have reached here, where we have done so many films together."

Ajay Devgn who was the first cop from this universe, after watching the trailer said, "I loved the trailer...Fab trailer. This is for the first time I'm watching it. I don't think I initially thought it would turn into this huge franchise."

Ranveer Singh who had a roaring success in 2018 with Simmba, is sharing the screen with Akshay Kumar and Ajay Devgn for the first time.  "I am too excited. I don't know whether I am excited about sharing screen space with my idols or reuniting with Rohit sir. I am as excited as the audience," he said.

The film is slated to release on March 24.

Also Read:Sooryavanshi trailer: Sooryavanshi joins hands with Simmba and Singham to save Mumbai from the next big terror attack