Actor and philanthropist Sonu Sood is not only known for his social work but also for his acting skills. The actor became a reel and real hero after his initiative of making people reach their hometown during the pandemic. He is at present busy with the promotions of his newly released musical track ‘Saath Kya Nibhaoge’ which is a remake version of Altaf Raja’s popular 90s track ‘Tum To Thehre Pardesi'. 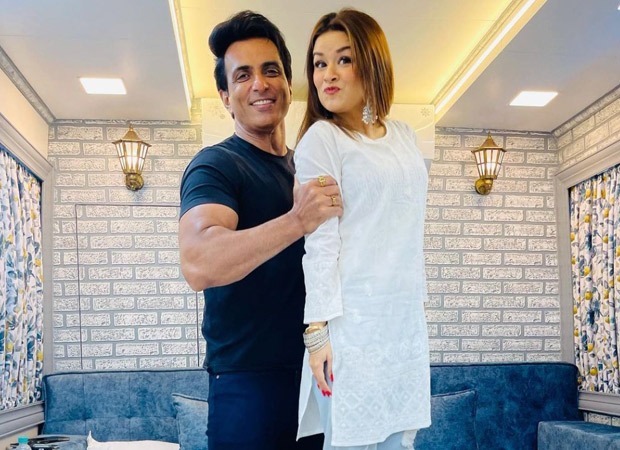 The 48-year-old star met Aladdin – Naam Toh Suna Hoga fame actress Avneet Kaur to promote his song ‘Saath Kya Nibhaoge’ with her. Avneet is not only a TV and film actress but also a highly popular social media star with 22.8m followers. The young diva seemed star-struck by her favorite hero's presence and smiled widely in the pictures with him. She captioned it, "Pleasure meeting you sir Sonu Sood huge respect". She also shared a funny snap where Sonu Sood is seen lifting her to match his height.

After the pictures, Avneet Kaur also posted a collaborative video with Sonu Sood creating a reel on his song ‘Saath Kya Nibhaoge’. She captioned it, "Meri daulat ka karna hai kya? @sonu_sood #saath kya nibhaoge".They created the video on the theme of betrayal and cheating. Avneet is dressed in white salwar and blue ripped jeans and long earrings while Sonu Sood looks dapper in a black shirt and jeans.

‘Saath Kya Nibhaoge' is about lovers reuniting again after getting separated in the previous birth. Sonu Sood is seen sharing the screen space with Munna Michael actress Niddhi Agerwal. It is produced and composed by singer Tony Kakkar and video direction is done by choreographer Farah Khan.