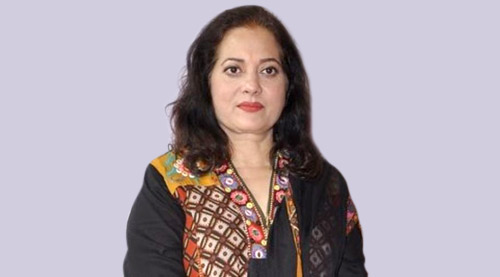 The shock of losing her husband Aadesh Shrivastav is yet to sink into Vijayta Pandit. The newly-bereaved Vijayta is surrounded by the comfort of family and friends when I catch up with her.


Making a valiant attempt to be brave in the face of such adversity Vijayta says, "This was no way to go, no age to go. Aadesh was filled with energy and laughter. He inspired all of us. Our sons hero-worshipped their Dad. The older one Anivesh was with his father in the hospital constantly and could bring himself to understand the enormity of the loss. But the younger son Avitesh couldn't take it. When his father was no more he went into a shock. Our boy fainted. The doctors at the hospital had to look into our son's treatment when Aadesh was no more."


Gathering her thoughts together in the face of such devastating tragedy Vijayta says, "Until the disease struck him, Aadesh was the most spirited person I know. He worked on his own terms. Never went out to seek work. He fought back the disease when it first stuck him and overcame it. Even when it stuck him again he put up a brave fight. But he lost. He was in so much pain. I couldn't bear to see him like that."


Vijayta breaks down and weeps inconsolably. "He wanted to see his sons on screen. The elder one is a talented musician. He composes songs in English. Aadesh and I took him to the US to release his first single. Unfortunately that couldn't happen. Now it's up to me to make sure Aadesh's dream for his sons are fulfilled."


During these trying times Vijayta is thankful to her family and friends. "I now realize how much Aadesh was liked. Everyone has been wonderful. My brother Lalit and his wife Meena were constantly at Aadesh's bedside. My dear friends Poonam Dhillon, Ayesha Jhulka, Alka Yagnik and Sunidhi Chauhan have been a pillar of strength. Baabul Supriyo flew in from Kolkata to be here when he heard the news. Suchitra Krishmamurthy, Sonu Nigam, Shaan have also been very supportive."


Vijayta has a special word of gratitude for Shekhar Kapoor. "Shekhar and Aadesh were very good friends. In his last days Aadesh wouldn't eat from anybody's hands except Shekhar. Every night Shekhar would come to feed him. Bachchan Saab who was very close to Aadesh couldn't bear to see Aadesh in this condition. He couldn't bring himself to come to the hospital. But he was on the phone with me and the doctors constantly."


Vijaya is filled with gratitude for the support. "Everyone has been so so wonderful. I am overwhelmed. But the shock of losing Aadesh has not fully sunk in. Bahot taqleef mein gaye. He was in so much pain. When I think of him as healthy and handsome I miss him so much. I know I've to be strong for my sons' sake. But the tears just don't stop. He wanted to see our elder one up there on the screen. But he couldn't. I hope he knew he was our hero. Do you know, his eyes were open and he was smiling when he passed away. He went with pleasant thoughts although life cheated him."