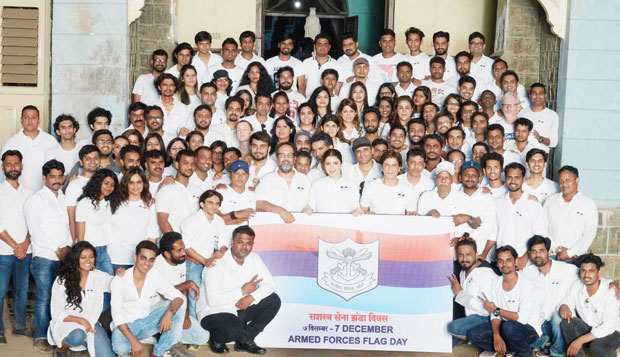 Although we have rarely seen Shah Rukh Khan speak up about his philanthropic work, the superstar has time and again showed his support to varied causes in action. One such moment when he got together with his entire team, including his production house Red Chillies Entertainment as well as his sports team Kolkata Knight Riders [of IPL] to support the Armed Forces.

Last weekend, we saw Varun Dhawan urging everyone to come out in support of the army officials who have time and again have sacrificed more than their lives for this nation. Now supporting this cause is also superstar Shah Rukh Khan who came out to stand up for the Armed Forces along with his forthcoming film’s team, Anushka Sharma and director-producer Aanand L. Rai.

The superstar and his teams paid their respect to the soldiers of India and expressed their gratitude to the forces. Shah Rukh Khan along with his team not only spoke about the sacrifices made by soldiers, but also the contribution of the armed forces in the well-being of the country. They also pledged their support and gave a shout out to soldiers on social media.

Shah Rukh Khan took to Twitter and wrote, "Our soldiers give their tomorrow for our today. They deserve our respect and gratitude. @RedChilliesEnt @KKRiders @vfx_redchillies @AnushkaSharma & @aanandlrai team supports them this #ArmedForcesWeek. Jai Hind!" Along with the message, the actor also shared a link where contributions for the Armed Forces can be made.

In fact, according to a post shared by Varun Dhawan, the actor had stated that while Armed Forces Flag Day is celebrated on December 7, this time around, the Government has plans to celebrate their courage and spirit for an entire week. Besides that, the Gen Y star too had urged others to make whole hearted donations to the army fund for the benefit of these soldiers.