Shah Rukh Khan makes time for his family even on the busiest of schedules. The actor returned to Mumbai from Chennai after wrapping a 30-day schedule for Atlee Kumar’s next directorial, Jawan. The long schedule required him to stay in Chennai. The actor straight away dived into the next schedule of Rajkumar Hirani's directorial Dunki. While he was busy with the night shoots and even early morning schedule on Sunday, he also took some time out from his busy schedule for AbRam Khan's Taekwondo competition. 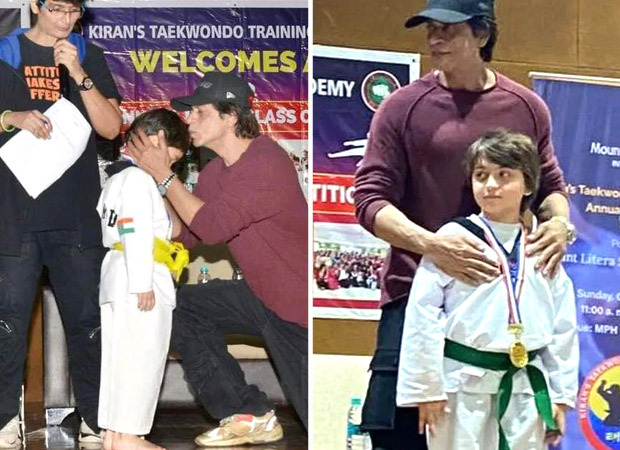 For the same, his wife Gauri Khan, and his two kids Aryan Khan and Suhana Khan were also in attendance. The family was seen supporting their little one at the competition.

At the same competition, Kareena Kapoor Khan, Saif Ali Khan and Karisma Kapoor were also present. They were in attendance to support Taimur Ali Khan who was seen in a competition against another kid. In several photos, Shah Rukh Khan was seen awarding Taimur a medal and even hugged and kissed him on his forehead.

In a group photo, one can see Shah Rukh Khan, Kareena Kapoor Khan, Saif Ali Khan, and Karisma Kapoor posed with the kids.

On the work front, Shah Rukh Khan is all set to make 2023 his year with three big releases, starting with the film Pathaan. It will be released in theatres on January 25, next year. The film stars Deepika Padukone and John Abraham. It is being directed by Siddharth Anand. Apart from that, he will be seen in Atlee's Jawan in June 2023. The film stars Vijay Sethupathi and Nayanthara. Deepika is expected to make a cameo. This will be followed by Rajkumar Hirani's Dunki in December 2023.

Kareena Kapoor Khan was last seen in Laal Singh Chaddha with Aamir Khan. The film released on August 11, 2022, and arrived on Netflix on October 6, 2022. She also has the adaptation of The Devotion of Suspect X with Vijay Varma and Jaideep Ahlawat. The film is directed by Sujoy Ghosh.