Last Updated 05.10.2022 | 9:41 PM IST
feedback language
follow us on
Bollywood Hungama » News » Bollywood Features News » Shah Rukh Khan gets angry and pulls back as a fan grabs his arm at the airport for a photo, son Aryan Khan calms him down, watch video

Bollywood superstar Shah Rukh Khan returned to Mumbai on Sunday with his two sons - Aryan Khan and AbRam Khan. The actor was in Budapest, London, shooting Dunki with Taapsee Pannu and Rajkumar Hirani. Now, he will resume the shoot for Atlee Kumar's Jawan. As he arrived at the airport, the superstar was surrounded by paparazzi and several fans. He held his youngest child close by as Aryan walked besides them. But, one moment left the Pathaan actor angry. 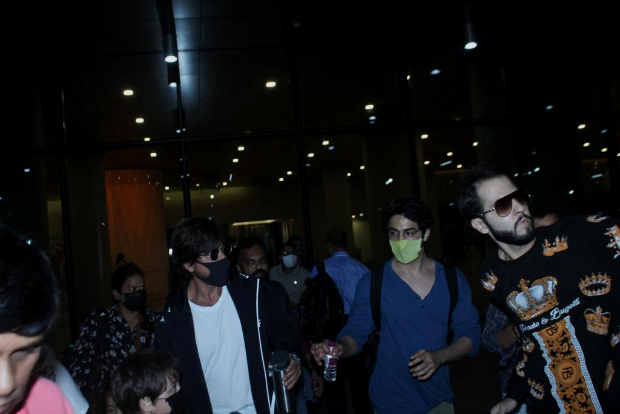 Shah Rukh Khan gets angry and pulls back as a fan grabs his arm at the airport for a photo, son Aryan Khan calms him down, watch video

In a video, Shah Rukh Khan was walking with AbRam Khan when a fan tried to forcefully take a photo with him. He grabbed the actor's hand which did not go down well with SRK. He was seen shaking his hand off, looked at the person and moved ahead and was visibly angry. Aryan Khan intervened and tried to calm down the actor.

Meanwhile, Shah Rukh Khan has three releases in 2023 starting with Pathaan in January, Jawan in June and Dunki in December.