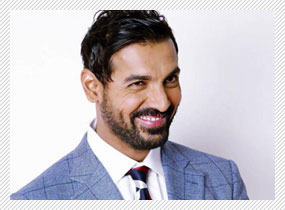 A two year long wait for John Abraham has come to a close. After being in the thick of affairs right through the conceptualization to the release of Shootout At Wadala, John is happy to see his film being pitched as 'respectfully' as it can be. For someone who has been around for a decade, John has all the right reasons to believe that the Sanjay Gupta film is a milestone in his career.

So John, how are you feeling today?

Relieved (smiles). I am actually very happy to see such an outstanding response so far. I give full credit to Ekta Kapoor and Sanjay Gupta. They have made sure that the film has turned out to be as big for all involved, as it can be. It is very special to all of us. We had a lot of faith in it and now we are looking forward to the best results.

You also got a chance to play a complete hero, isn't it?

True. Working in an out and out commercial Hindi film comes with its own perks. There was romance, drama, music, action, just about everything in there. However, most importantly it is a good film. Also, it is a very relevant and credible film. Reason being that there is a large element of truth behind everything, which has proven to be the USP.

Well, as for action, you have apparently gone through your fair share of cuts and bruises while shooting for the film.

All of that was worth it though because action is not mindless in there. It has a lot of heart, pathos and pain to it. When action is backed with emotion, it makes a lot of sense. It is easy to jump around and do mindless action but the one with emotion is special. You can see that coming into play during the climax action sequence; Sanjay has handled it all very carefully.

Sanjay has been shown to present his men like no one else and after Zinda, you managed to reunite with him after 8 years. That must have been special too, right?

I believe he has completely outdone himself with the film. I thank Sanjay and Ekta for having faith in me to play Manya Surve. It is a career defining role and a lot of it also has to do with the fact that while 20% of my character graph comes across well due to the research, 80% of it is due to the kind of detailing Sanjay brought it. He helped me get into the act right.

Another act that has gone perfectly right is that of Anil Kapoor. This is a rare instance of two actors being seen together so quick, last being Race 2.
I respect him as an actor and a human being. I have a high regard for him, just like our on-screen characters who really admire each other despite being on the other sides of the law. Yes, they were adversaries at the end of the day and hence one of them had to die. I think we really worked hard on building on-screen camaraderie and our personal relationship with each other paid off.

How was the camaraderie with Sunny Leone?

(Smiles) Well, Sunny told me on the last day of the shoot that she had never been more comfortable on the sets than during Shootout At Wadala. She was made to feel very comfortable. She too lends very positive vibes when you work with her. Reason being that she is a very professional person, comes on the sets on time and does her work with integrity.