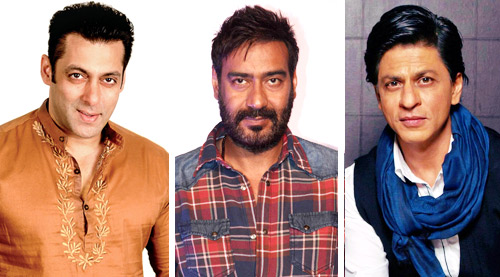 Diwali has traditionally been a lucrative time for a major Bollywood release and year after year, an average of two (and at times even

three or four) films release on the festive occasion. However, in 2013, it was for the first time ever in the decade gone by that a solo release arrived on

Diwali in the form of Krrish 3. The film was a huge blockbuster and then last year Shah Rukh Khan arrived with solo release Happy New Year on

This year too, the story is repeating as audience would see Salman Khan, and only Salman Khan with his Prem Ratan Dhan Payo flying solo on its

Here is looking at some of major money spinners during last 10 years (from 2005 to 2014) that have made merry on the occasion of Diwali. Incidentally, while

Shah Rukh Khan continues to rule with as many as five biggies in there, Ajay Devgn comes second with four films while Hrithik Roshan and Akshay Kumar have

Ironically, Salman Khan has never been a Diwali favourite and none of his films feature in the list of top Diwali grossers. All of that would change now with

Happy New Year (2014) - Shahrukh Khan
When it opened, a huge Opening Day record was set. This was also the first time when the Rs. 40 crore mark was crossed on the very first day of release. For

Shah Rukh Khan and Farah Khan, this was a sweet way of setting up their hat-trick film after Main Hoon Naa and Om Shanti Om. While the weekend

was held quite well and the opening week was strong too, the collections did fall from the second week on. The film wrapped up soon but not before entering

the Rs. 200 crore club, hence turning out to be a Superhit.

Krrish 3 (2013) - Hrithik Roshan
Did the collections indeed cross Rs. 200 crore mark? Or in reality they are closer to the Rs. 175 crore mark? No one would ever know as even after a

nationwide debate, there is no clear verdict till date. Roshans do claim though that they have a double century in hand. We want to believe that, though

trade is divided. All said and done, the film stays on to be biggest Diwali box office bonanza ever and all eyes are now on Prem Ratan Dhan Payo to

Yash Chopra was marred in controversy (due to clash with Son of Sardaar). However Shahrukh and Aditya Chopra went ahead with their original plans and

gave the film an event release. Mixed response meant that the film crossed Rs. 100 crores but didn't scale many highs.

Son Of Sardaar (2012) - Ajay Devgn
One of the most lucrative times at the box office was in year 2012 when Son of Sardaar and Jab Tak Hai Jaan released on the same day. Though

there was much bad blood spilling over in public due to issue around sharing of screens between the two films, eventually Ajay Devgn did manage to keep his

Diwali record intact and hit a century at the box office.

Ra.One (2011) - Shah Rukh Khan
Ra.One could well hold an unlikely distinction of being one of the highest Diwali grosser ever and still face the ignominy of being panned by many. It

took a thunderous start and was immensely liked by the kids especially. However, just like the rise, there was a steep fall too with fast spreading negative

word of mouth resulting in its downfall. Ironically, it was Shah Rukh Khan's highest grosser till date back then.

Golmaal 3 (2010) - Ajay Devgn
Ajay Devgn and Rohit Shetty were sure that they wanted to make amends over Golmaal Returns and improve manifold with third in the series. They managed

to do quite well too with Golmaal 3 taking a thunderous start at the box office, while eclipsing Action Replayy. Audience came in hordes to

watch the comedy which was much bigger and better. The film went on to bring in over Rs. 100 crores at the box office.

All the Best (2009) - Ajay Devgn
Ajay Devgn and Rohit Shetty were turning out to be a successful combo from the Golmaal franchise and their next comedy together, All The Best,

proved to be successful too. Though it was Akshay Kumar's Blue (which released alongside) taking a better start at the box office and All The

Best was slow to begin with, it ended up being stable and enjoyed a longer run.

Golmaal Returns (2008) - Ajay Devgn
Even before All The Best turned into a good success, Ajay Devgn had made a mark on Diwali with Golmaal Returns. Though the film was panned by

critics all around, audience didn't seem to mind it and helped the film take a superb opening at the box office. The film managed to cross the Rs. 50 crore

mark and though not many associated with it would recall it very fondly today, the franchise was well established.

Sanjay Leela Bhansali's competition in the form of Saawariya. There was no sympathy shown towards emergence of wonder-kid Ranbir Kapoor as Shah Rukh

Khan and Farah Khan methodically planned their campaign and ended up scoring over Rs. 75 crore at the box office.

Don (2006) - Shah Rukh Khan
Shah Rukh Khan knew that with a Diwali release two years after Veer Zaara, he had to make it really big. This was the time when he explored newer

avenues of marketing and promotion, hence embarking on a multiple city tours and Paid Previews screening, something that was hitherto unexplored. Result? The

film took a thunderous start and was the biggest ever Diwali success with the Rs. 50 crore mark crossed.

Garam Masala (2005) - Akshay Kumar
When Garam Masala released in 2005, the Akshay Kumar-John Abraham combo managed to beat none other than Salman Khan whose Kyunki had released

the same day. Moreover, both these films had the same director - Priyadarshan - at the helm of affairs. While he gave his Hera Pheri hero a hit,

Priyan ended up apologising to Salman Khan for letting him down with a major commercial flop.