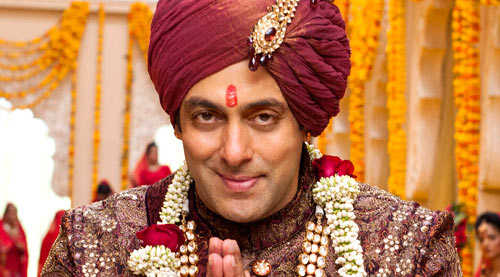 
2. Sooraj Barjatya + Salman equals havoc: In the past the combo created history twice over in Maine Pyar Kiya and Hum Aapke Hain Koun. Okay, their third collaboration in Hum Saath Saath Hain was not such a happy experience. But the curiosity to see Salman and Sooraj renew their association after 12 years is abundant.


3. Salman Khan in a double Role: He was last seen playing two roles in his buddy Sajid Nadiadwala's Judwaa in 1997. Now he returns in another double role for another pal. But with a difference. Both the Salmans will woo Sonam only. Lucky dame.


4. Virgin-fresh pair: And we do mean virgin...didn't Salman declare he was 'saving' himself for his wedding night? His combination with Bollywood's favourite fashionista Sonam Kapoor is bound to yield some yummy results. And never mind their disastrous pairing in Saawariya.


5. Sonam goes ethnic: We've never seen her sizzle in the sansktrik style before. Sonam Kapoor seems to have given it her best shot, even while doing the signature step in the title song which seems inspired from Leena Chandavarkar 'Buddhu Pad Gaya Palle' song and dance in the 1973 film Anhonee, directed by Raveena Tandon's father Ravi Tandon.


6. The re-invention of Neil & Armaan: Two out of work star-kids get a relaunch courtesy Salman and Sooraj, in villainous roles. Aarmaan's association with 'Bhai' started on Bigg Boss. Neil never went to Bigg Boss. But he can. Any time. Losers are always welcome.


7. The musical factor: It's been ages since we saw a musical family drama. In Sooraj's earlier films with Salman, music composers Raamlaxman conceptualized composed and executed 10-11 songs. Himesh Reshammiya has composed 10 songs for PRDP. If music is the food love, then PRDP is a feast.


8. The Salman-Sonam romance: Sooraj has handled the amorous moments between the two delicately and subtly. Though there isn't much chemistry evident between them, the scenes between Sonam and Salman echo Salman's camaraderie with Aishwarya in Hum...Dil De Chuke Sanam.


9. Hum Dono: While focusing on all things light and bright Sooraj brings into focus the darker side of the dual-personality syndrome when the God Hero is replaced by the Bad hero, a la Shashi Kapoor in Haseena Maan Jayegi and Navin Nischol in Sawan Bhadow


10. The law of equality: Damn! Salman may not need it but his producers Fox-Star studios needs a hit really badly. Ooparwala zaroor sunega jab Sooraj chamkega.