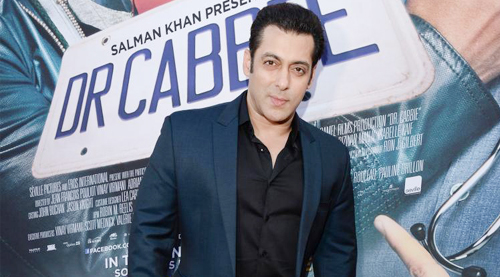 Agreed that he is presenting Dr. Cabbie through Salman Khan Being Human [SKBH] Productions. However, even those associated with the film were taken by surprise when Salman Khan decided to watch the Indo-Canadian collaboration twice on back to back days. Though superstars are generally seen stepping in and out of screenings after seeing a film once, Salman made an exception for Dr. Cabbie.

"Since he made a special visit to Canada in order to promote Dr. Cabbie, it was a given that he would watch the film as well. Hence, a special screening was arranged for him and some close friends and family members a night before the premiere. Salman thoroughly enjoyed the show and complimented central protagonist Vinay Virmani (Breakaway, David) for his endearing act," informs our source from Canada.

While that was a heartfelt moment for all associated for the film, there was further madness in the offering when the night of the premiere arrived. Once news spread that Salman Khan would be walking the red carpet for the film and other cast members (Kunal Nayyar, Isabelle Kaif) would join in as well, there was uncontrollable rush. In addition, quite a few prominent personalities from the film and music world of Canada were invited as well that made it a high-on-glamour event.

"For Vinay and others, it was high huge enough when Salman Khan graced the premiere. However, they were up for a pleasant surprise when the actor watched the entire film all over again. Normally in Bollywood, stars step out after audience has settled down and then join them again before curtains go down, in order to gauge their reactions. However, Salman liked the film so much that he didn't mind watching it twice within 48 hours," the source adds.

Later, he made it a point to hail Dr. Cabbie for the effort that was put into the film and was quite generous with his compliments, especially for Vinay (whom he found earnest) and Kunal (whom he found really funny). No wonder, even though more than a fortnight remains for the Canadian release of the film (this Jean-Francois Poulliot directed film would be traveling internationally post that), there is immense buzz that has built in the country for this tale of an unemployed doctor turned cab driver who becomes a local hero when he converts his taxi into a mobile clinic.