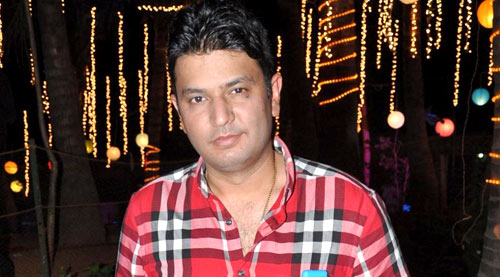 "For me, competition is always healthy," said T Series chief Bhushan Kumar in a Bollywood Hungama exclusive interview with Faridoon Shahryar. "If you look at our last year's performance, we are miles ahead of so many other players," Kumar added stressing that he is concentrating on churning out quality content, make more films under his banner and control costs as much as possible. Mr Kumar is excited about the single 'Zindagi Aa Raha Hoon Main', sung by Atif Aslam featuring the superlative dance prowess of Tiger Shroff in the hip music video. He also shared his future plans.

How did you come up with the idea for 'Zindagi Aa Raha Hu Main' and that too with Tiger Shroff and Atif Aslam?

I got associated with Tiger since we promoted his first film Heropanti. My father used to know his father Jackie Shroff very well. It was Tiger who along with Ahmed Khan came up with the idea of doing the single. He basically wanted to thank his supporters in some way by giving a song which is connected to a common man in a very different, dancing way. That's the brief that Tiger gave me. So I immediately told lyricist Manoj Muntashir and music composer Amaal Mallik to work on this song. And then we came up with the song 'Zindagi Aa Raha Hu Main', a very good, inspirational track with the beats, the dubstep, the EDM etc and melody and lyrics have been kept intact in such a way that the song can go to the next level. And we cracked this song in 24 hours. Hence, this is the fastest song that I have made after 'Sooraj Dooba Hai', which took 48 hours. It happens - some songs are made instantly while for others, humein mahino lag jaate hain.

Atif Aslam was under contract with Tips but now he's open to doing songs for other music companies. So can we see Atif doing more work with T-Series - movies as well as independent albums?

Atif and I gelled so well in our first meeting itself that we cracked 'Zindagi Aa Raha Hu Main'. The relation that has built up between us will go many folds now. He was reluctant at first since he was with another music company for 7 years under a contract. I told him that I don't want
to sign any contract with him. I don't have a contract with Yo Yo Honey Singh. I didn't have a contract with Himesh Reshammiya when I gave his biggest album Aap Ka Surroor. I didn't even have any contract with Adnan Sami when I did 'Tera Chehra'. I don't believe in contracts, especially with established singers. So, even Atif was relieved since he was expecting that
I'll ask for a contract. I told him that you have a talent for music and you are passionate and I want to explore that since I'm also very passionate about music. We might do an album or a
single or may collaborate with him on a film.


T-Series has been a dominant player in the Indian music scene. But now with the coming in of Zee Music Company, how do you look at the changing scenario?

For me, competition is always healthy. And our music company runs on quality, it doesn't work on quantity. We used to work on quantity but because of the competition, we thought that let's leave the quantity. This is because quantity is not something that'll last forever. Even the TV
channels, web streaming channels, radio stations etc. always run quality music. Last year, we had 20-25 super hit songs. And that's it - that's what a music company needs. And this year, I'll be having 40 super hit songs. I have controlled my costs by giving more quality music. I have big films also and I am even making my own films. Last year, I had 3 films. This year, I have my own 5 films and all are musicals. Next year, I'll come up with 12 films. So I can't acquire music of 50 outside films and at the same time handle music of my 12 films. It's impossible to handle so much of work. If you look at our last year's performance, we are miles ahead of so many other players.


Can you explain your strategy of producing films as well as acquiring music of outside films?

We are acquiring music of banners that are working with us like Sajid Nadiadwala, Salman Khan Productions, Ritesh Sidhwani's Excel Entertainment, Balaji Motion Pictures etc and sometime, we acquire music of even Dharma Productions. It's just that I don't want to buy everything now since I also want to concentrate on my own films.

Your productions have done exceptional business at the box office. Does it make you feel good that the belief that you had in your productions has paid off, especially in the current scenario when some major films have not worked?

It's very encouraging. Till date, we have not lost money on any of our films. Our marketing style of not spending too much money and having great music is a strategy that is working. This has given us confidence to make more films. But now we are concentrating more on content. Like, all films made by us have great music. So similarly, we want to ensure all our films have good scripts as well. Frankly, I am still learning to select good scripts. For instance, Baby was a good selection on my part. I hope Airlift also pays off. And All Is Well should be a good family entertainer replete with music, emotions etc. Also, we are planning Baby 2 and 102 Not Out with Amitabh Bachchan and Umesh Shukla. The latter would be a different kind of emotional, entertaining film.

Did Salman Khan recommend Daisy Shah to you for Hate Story 3?

Salman recommended me generally that if possible; do cast Daisy if she suits the part. And she's a good actor and she proved her worth with Jai Ho. However, we took the screen test and only when we realized that she was fit for the role that she bagged the part.

What's the status of All Is Well? It had got delayed after Smriti Irani became the ministerâ€¦

All Is Well is on track and it's releasing on August 21 this year. We just have to shoot one song which we'll shoot in mid-May.

Are you looking forward to Salman Khan singing a song again, in Hero remake?

Yeah, he is singing a brilliant song and we are very excited about it. He has sung it very well.

We have started Airlift with Akshay Kumar. Now we'll be starting Hate Story 3 and Baadshaho with Ajay Devgn. A film with Mohit Suri is in pipeline but the casting is yet to be done. We are planning a film with Varun Dhawan also. Aashiqui 3 is on cards this year for sure. We don't know if Mohit Suri will direct but Mahesh Bhatt has written the script. We are also planning Dil Hai Ke Manta Nahin 2. We are also co-producing Pooja Bhatt's films Love Affair and Cabaret.