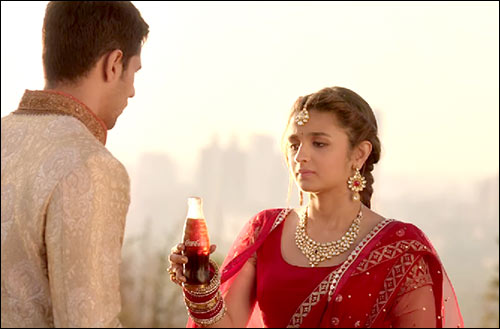 Sidharth Malhotra and Alia Bhatt started their career together with the film Student Of The Year and their chemistry surely won the hearts of many. And now cashing in on their adorable chemistry is the cola brand Coca Cola. The two are not only the new faces of the brand but they have also been a series of ad commercials.

The first one had Sidharth Malhotra and Alia Bhatt playing urban teens showing their fun filled sweet-bitter relationship over a bottle of Coca Cola in a cafe. And this one, quite a contrast to the other, has Alia playing a coy bride and Sidharth as the groom who tries to bond with his partner during the car ride.

Here's a glimpse of the cola advertisement