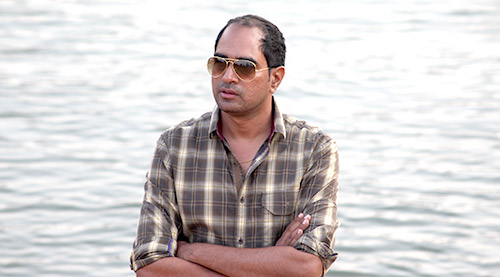 Krish is a happy man. With his very first film in Bollywood, he has managed to score the biggest opening for a Hindi outing this year. In the times when audience needs some real good reason to step into theaters, the 36 year old from South film industry has not just been trusted to helm an Akshay Kumar starrer but also justify the decision by delivering an entertainer that has worked across segments. Even as one awaits the final verdict for Gabbar Is Back, the fact remains that it has been a plus affair for Krish, hence turning out to be a sweet 'Welcome to Bollywood' moment for him. We talk to the soft spoken director.

You must be personally glad with the fact that even though Gabbar is your debut Bollywood film, there has been some good response already?

I am really blessed. I have to thank Sanjay sir, Akshay sir, Shabina ji and Viacom for the way they have launched Gabbar Is Back. Thanks to all the attractive promotion and some great marketing ideas, audiences were excited enough to check out 'kaun hai yeh Gabbar' (smiles).

Even though corruption is a subject that is beaten to death, what prompted you to make Gabbar Is Back on this subject?

That's because despite being assumed to be beaten to death, it is still alive and kicking. We had to make the film very fast paced and exciting, while ensuring superb momentum right through the narrative. I have to thank Rajat Aroraa who has written the dialogues and also another guy from South called Kannan. Together they did additional screenplay which makes the film so interesting. The intermission point has turned out to be very stunning, courtesy them.

Yes, people are talking about the intermission point. This is when the main villain Suman Talwar stuns everyone.

Gabbar had to fight a much bigger villain. As you can see, Suman is very important to the film, he is not just for namesake. It is because of him that things go haywire. He has given a very powerful performance. Also, when both of them are fighting, it looks realistic because he too knows martial arts just like Akshay sir. I am happy that Akshay sir suggested Suman to come on board after watching him in Sivaji. I am amazed that he knows so many actors across so many languages. He watches a lot of movies (smiles).

How much of contribution did Akshay Kumar make to the making of the film?

We had three readings of the script and each time around we got some valuable inputs that we incorporated and hence made the film water tight, very gripping and entertaining. We wanted to get the right amount of commercial elements into play. Only when we were sure about it being really strong that we went ahead with the film. This is why you see the film's duration as just 2.10 hours. It is very crisp.

In any case, Akshay finishes his films very fast and wants to keep the length to the point, isn't it?

(Laughs) Yes. The best thing about Akshay sir is that he makes the whole set highly disciplined and entertaining. He is so hard working and down to earth; he motivates everyone and ends up making you disciplined in and out. When someone like him comes first on the sets, others have to follow suit.

You also had Chitrangda Singh on the sets for a song and dance appearance - 'Aao Raja'. She is an unlikely choice for an item number, isn't it?

Chitrangda was Shabinaji and Akshay sir's call. We needed someone for an exciting number when events are turning on screen. I am a big fan of item songs and Yo Yo Honey Singh came up with such a quirky and highly pulsating number. Vishnu Deva has choreographed the song so very well and given Chitrangda wonderful moves.

You do have a wonderful role written for Sunil Grover too who has forever been known as Gutthi.

I am sure that from now one he would be called Sadhu Ram. As you can see, he has given a stunning performance in the film. He is so integral to Gabbar Is Back and I am sure he would be big after this now. I am also quite happy to have roped in Jaideep Ahlawat. He is a fabulous actor and I believe he still hasn't got his due. As a matter of fact I had tried working with him in a Telugu film earlier but it couldn't work out. This time when his name popped up, we were happy that he could eventually come in.