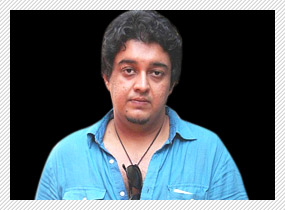 Says the director, "I wanted to create a toy-world in the film. I wanted the audiences to feel they were inside a toy while watching the film. I am a big fan of Johnnie To and Robert Rodriguez. When Kangna takes Vir to the filmcity that she has built for him it's like being inside a gigantic toy."


Vir Das as the wannabe Bollywood star and Kangna's resident toy-boy represents, for the director, "the great Indian dream".


Says Sai Kabir, "Taking short cuts to get where young people want to get is an accepted form of immoral behaviour. It's cool to be corrupt for the sake of your desires and dreams. Youngsters who take short-cuts think they can get away with it. They think they cando some jhol in the stock market and get out with some fast bucks. But it doesn't work that way. The whole Modern Indian Dream is a bloody bubble. Vir Das character gets trapped in his dream. Even the conversion to Islam and the second marriage ceremony that he goes through for the sake of the media , is a short-cut horribly gone wrong. But he has also got his poetry. He is not a villain like Amrish Puri and Prem Chopra."


Sai Kabir says even the film's photography was purposely splashy and kitschy to accentuate the comic-book sentiment. "I don't know if that comic book feeling comes across. If you see the way the story unfolds there are no Bollywood references in Revolver Rani at all. It's actually a celebration of gutter-level existence. Kangna is a part of that guttural existence until she becomes pregnant. The baby symbolizes a surreal divine intervention. From her gutter-level insane existence she wants to move towards purity and sanity. The baby symbolizes sanity, purity an arcadian innocence. But she can't quit the gutter."


A lot of the cross references in the plot about sleazy politicians and cheesy middlemen seem borrowed from real-life politics.


Says Sai, "It's not just about Madhya Pradesh or the Chambal Valley. My political references are taken from all over the country. Tribals being usurped from their roots, power plants being unconstitutionally sanctioned....these are epidemic political issues. And if you look at the news anchor Payal Prahihar (played by Mishka Singh) she is not just a source of humour in the plot, she is a major irritant for all the characters. And why just the characters, even I find her a nuisance. A section of the electronic media which snoops into celebrity lives is a bloody irritant. These are characters taken from the real-life politics. But it's all depicted in comic-book fashion."


Kangna's aggressive libido and her insistence on being the partner on top in her relationship with her toy-boy Vir Das seems like a devious role reversal of traditional gender equations in film and society.


Sai Kabir says he deliberately planned it that way. "To be honest I knew such aggressive sexuality in the female protagonist would definitely generate interest in the male audience. But at the same time I also thought this kind of naked female lust would also connect with the female audience. On the face of it, women may deny strong sexual feelings. But somewhere Kangna's character's libido is a fantasy that women surely identify with. Why should only Bollywood heroes play eternal Casanovas while heroines are supposed to remain coy about sex? I thought Kangna's mixture of love and lust for Vir Das is liberating in many ways."


Sai then adds, "Lust relationships are very weird. Even when you know your partner is f..king around you can't stop craving for your partner."


The director wanted to show that Kangna's character tolerates Vir Das' philandering because of the pregnancy. "That was one mistake I made in the story telling. Kangna's character feels that having a Daddy around for her unborn baby is a cool idea. But it's an idea that couldn't come across in the narration. This is my first release. And I didn't get a chance to rectify the mistakes."


Sai Kabir can't wait to embark on his next cinematic journey with Kangna. "She has played Alka Singh with incredible understanding. The woman is an outlaw. But she is alsoa victim.She has an inherently violent streak about her which people around her exploit and use to their own advantage. She is like a heroine from the Shakespearean dramas manipulated by king makers. I chose Chambal because I needed a brash backdrop."

After Gangubai Kathiawadi wrap up, Alia…