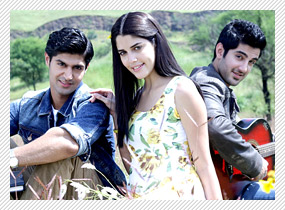 Purani Jeans released this week and there are some understated gems that Bollywood Hungama would like to share with you!

- That in the event of a break up on the anvil, a hero and a heroine can't have one decent conversation for just a minute to solve all misunderstandings

- That miscommunication is such an order of the day that even after catching his step-father red handed in an affair, an outgoing young boy won't share all the details with his beloved mother

- That in this miscommunication, even seeing isn't believing, what with a boy pretty much ignoring his best friend falling for his lady love, even as her name is engraved on his arm with a blade no less

- That it could well spell relief for people around you, if you assure them that actually a 'sterilized blade' was used to engrave the name

- That if you are an intellectual lot, you stand a chance to 'patao' a Mumbai hottie as she isn't easily swayed away by Mr. Multi Millionaire charming stud boys

- That if you are a dumbo lot, your father would actually chase you down on the streets of Kasauli, just because you flicked his 'personal samaan' i.e. a condom no less, from his bedroom

- That if you are a dumbo lot, you could actually not just get to kiss a foreign national but even get married to her after a rather stupid attempt at kissing and dancing with her

- That in a Bollywood film, everything would eventually boil down to coincidences, what with a mother dying, a friend getting married and another breaking off her engagement, all practically inside a week