Now this one has come out of the blue and what a surprise it has thrown!

Mulk is a film that has been made in a quick time by filmmaker Anubhav Sinha, who had last directed Tum Bin 2 [2016]. From a romantic musical, he has switched genres to make a dramatic social thriller with a backdrop of religion to it. Though one did expect the veteran director to make quite a few statements with his Hindu-Muslim tale, the manner in which the promo unfolds lends an impression that Mulk is set to raise quite a few eyebrows as well. 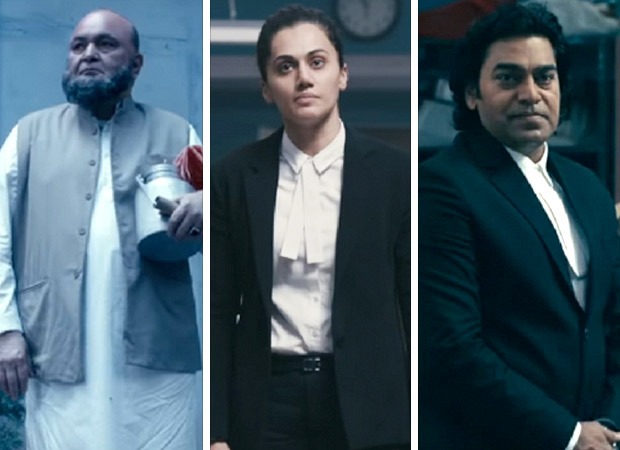 For a start, this one pretty much calls a spade a spade and that too without mincing any words. With Rishi Kapoor playing a Muslim senior citizen who is accused of conspiring in a terror attack, the film has two lawyers fighting it out from the opposite ends. While Ashutosh Rana plays a public prosecutor who is on a mission to prove Rishi Kapoor (and alongside him everyone belonging to his religion) guilty, Taapsee Pannu plays the defense lawyer. Rajat Kapoor enacts the part of a cop who was out on the field to nab a Muslim youngster [Prateik Babbar] who is suspected of terrorism.

While the plotline may still look familiar since there have been quite a few films and TV series (especially in West) that have explored this subject, what makes Mulk special is the fact that it doesn't hold back in its commentary. Of course, it is still early days and what you see is basically 150 seconds of a very well cut promo. However, if one has to consider the kind of start that has been made then it is quite apparent that the film is neither being fake nor pretentious as it goes on to challenge quite a few norms and question the status quo as well that exists around certain set perceptions.

Whose 'mulk' it is and whether one has to command the respect and standing or demand it? That's one of the core underlining themes of the film that is set to release in less than a month from now. However, what could well have turned out to be a documentary or art-house cinema has clearly been given a definitive commercial treatment by Anubhav.

The filmmaker has dabbled in genres across romance [Tum Bin], action [Dus] and superhero affairs [Ra.One] but if the first look of Mulk is any indication, he is clearly set to deliver his most powerful statement till date.