Last Updated 06.12.2022 | 10:11 AM IST
feedback language
follow us on
Bollywood Hungama » News » Bollywood Features News » Richa Chadha and Ali Fazal break into an impromptu dance at their sangeet and it is so relatable!

For the past few days Ali Fazal and Richa Chadha have been quite active on social media and unlike many other Bollywood stars, the two of them decided to go all out and not shied away from sharing deets to the media or their fans. The couple has also even posting some glimpses of their wedding functions on social media. Now, after they shared a few photos of their sangeet ceremony, we got hold of a couple of videos from the celebration where we can see them in all candidness. 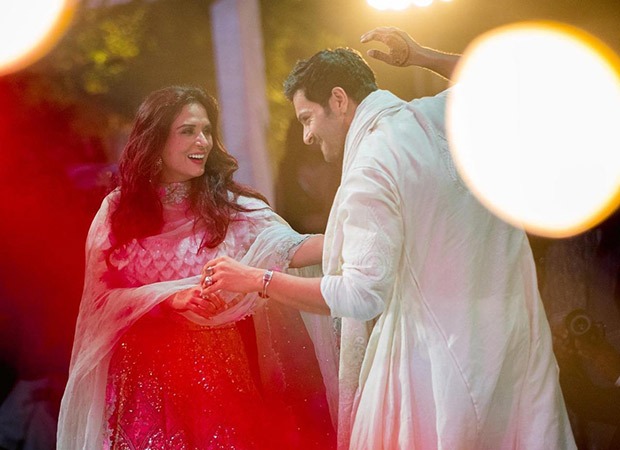 Richa Chadha and Ali Fazal break into an impromptu dance at their sangeet and it is so relatable!

Ali Fazal and Richa Chadha, who kicked off their wedding celebrations in Delhi, were seen dancing wholeheartedly at their sangeet ceremony. The couple, in fact, broke into an impromptu performance on the song ‘Ambarsariya’ which definitely might be special for them. Readers may be aware that Ali and Richa started bonding from their first film together, Fukrey and ‘Ambarsariya’ is a popular romantic track from the film. However, the original song featured Pulkit Samrat and Priya Anand. Besides this lovely number, the two of them were also seen letting it loose on the song ‘Ranjha Ranjha’ from the 2010 film Raavan featuring Abhishek Bachchan, Aishwarya Rai Bachchan, and Vikram.

Coming to the wedding, Ali Fazal and Richa Chadha flew to the capital as their celebrations began on September 30. The couple also hosted a private get-together prior to these ceremonies for their friends and families to bond. The couple is expected to tie the knot this week in Mumbai and also host a grand reception in the city as well as in the capital for their colleagues and relatives. On the work front, Richa will be seen in the Sanjay Leela Bhansali magnum opus web-series Heeramandi whereas husband Ali Fazal will reprise Guddu in the third season of the popular Amazon Prime series Mirzapur.