Priyanka Chopra has had quite a year with her wedding with Nick Jonas and juggling projects and shooting schedules between India and USA. She starred in a Netflix original movie titled Isn’t It Romantic with Rebel Wilson, Adam Devine and Liam Hemsworth. After which, she started working on a Bollywood movie, The Sky Is Pink, starring Farhan Akhtar and Zaira Wasim. The team has recently wrapped up the shooting schedule of the film in Andaman Islands and Priyanka is thrilled to be a part of a Hindi movie after so long. 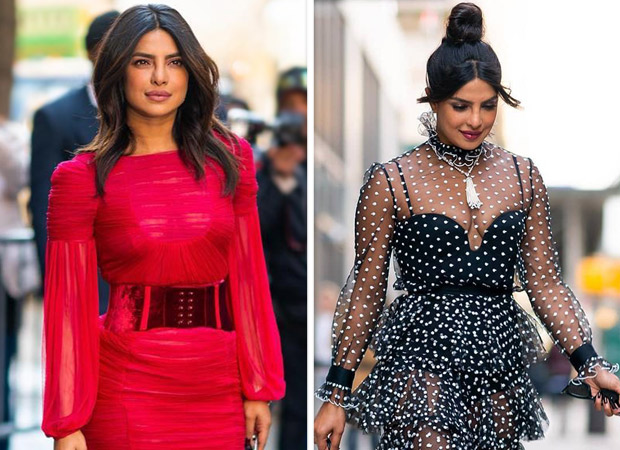 Apart from her film projects, Priyanka Chopra Jonas also featured in Jonas Brothers’ comeback music video, Sucker. Her appearance in the video came as a surprise to everyone. Now, she is promoting her YouTube special titled If I Could Tell You Just One Thing. She donned two beautiful outfits for the promotions and we can’t decide which look we like better! One is a classic red body-con dress by Tom Ford. To add more gravitas to the dress she paired it up with a metallic red waist belt and some red peep-toed pumps. She stuck to minimal makeup and minimal accessories as usual and her hair let down, with soft waves looked absolutely gorgeous. For the second look, she opted for a sheer black dress with white polka dots from Philosophy di Lorenzo Serafini. Her dress had gorgeous frills and she is definitely bringing the 70s back with a bang. She paired her sheer dress with an all-black corset by Laperla. For her shoes, she went for the classic black Christain Louboutin tie-up stilettos. She had her hair up in a high bun with some flicks falling out at the front. Both her looks were styled by Mimi Cuttrell.

Take a look at them and decide which one you like the best.

Both her looks have all of our hearts and we can’t get over them anytime sooner! We’re waiting eagerly to see more of Priyanka Chopra Jonas carry these looks with such class and grace.

Also Read: THIS is what Nick Jonas gifted Priyanka Chopra Jonas after Sucker topped the charts