The Jonas Brothers, Kevin, Joe and Nick, recently released their first music video after an almost decade long hiatus titled ‘Sucker’. The boys were seen having a blast with their better halves in the music video and it was a fun family affair. The single is being appreciated by the fans especially when nobody saw the reunion coming. The boys decided to take up their solo careers around 2010-11. While Kevin decided to focus on his family, Nick went solo and Joe joined another band called DNCE. 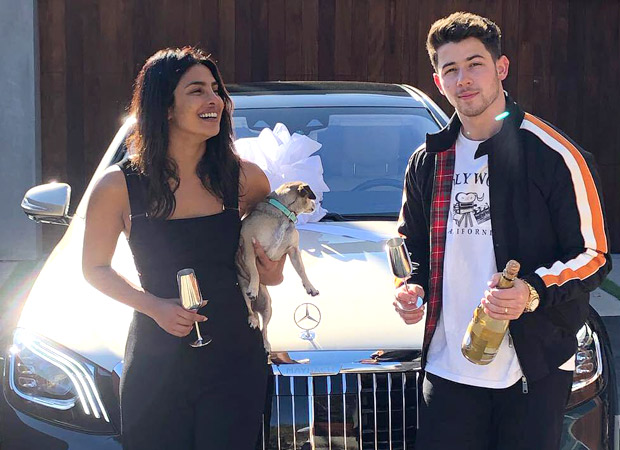 Recently, our desi girl, Priyanka Chopra tied the knot with Nick and it was a glitzy affair. It’s not like we have to mention, but Priyanka looked super fancy and dreamy in the music video. /the video gives a very Alice in Wonderland feel, but looks amazing nonetheless. With the music video already crossing a few million views on YouTube, the song Sucker had topped the charts in USA and Nick Jonas decided to gift his wifey a little something. He went on to gift Priyanka a very beautiful Maybach car! She recently returned to LA after completing the shooting for The Sky Is Pink opposite Farhan Akhtar and Zaira Wasim. Take a look at the happy couple as they pose along with the car, some champagne, and PC’s pooch Diana.

Isn’t that the sweetest gift? Nick Jonas sure knows how to keep his ladylove happy! On the work front, Priyanka will be seen featuring in a Bollywood movie after a long time and we can’t wait to see her in Shonali Bose’s directorial, The Sky Is Pink. The movie celebrates life instead of mourning a person’s death. A very unconventional take on death, the story revolves around a couple who lose their child to an incurable disease. Priyanka was also recently seen starring in Isn’t It Romantic, a Netflix original movie. Also Read: Priyanka Chopra Jonas and Jacqueline Fernandez stay up for a late night pep talk, Janhvi Kapoor, Ishaan Khatter and others join the party