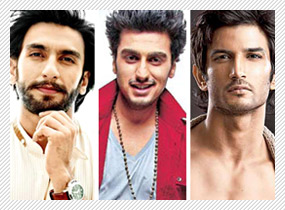 With each of the three Khans under their belt, it was an eventful phase for Yash Raj Films as they consolidated their place as the Numero Uno production house. Now they appear to have made a strategic decision to rope in practically all youngsters and upcoming actors, hence ensuring that their slate for next couple of years bears an altogether different strategy.

"For Yash Raj, it was a major killing when they had Salman Khan (Ek Tha Tiger), Shah Rukh Khan (Jab Tak Hai Jaan) and Aamir Khan (Dhoom 3) working on the biggest films ever to come out of their banner. With Katrina Kaif as the common factor across each of these films, the production house announced loud and clear that they were unassailable. While that mission has been accomplished, it is clear that Aditya Chopra is now exploring newer milestones. He is eyeing all possible new talent that Bollywood is boasting of today and each one of them is more than happy to oblige as well," says a source.

This is obvious from the fact that everyone from Ranveer Singh, Arjun Kapoor and Sushant Singh Rajput to Ali Zafar, Ayushmann Khurranna and Aditya Roy Kapur is doing at least a film or two with Yash Raj.

"Ranveer Singh and Arjun Kapoor are coming together for Gunday and Ranveer is also teaming up with Ali Zafar for Kill Dil. Each one of them has worked with Yash Raj earlier and is glad to take the association forward," the source adds, "Then there is Sushant Singh Rajput who is the lead hero of Shuddh Desi Romance whereas Ayushmann Khurranna is the central protagonist in Nupur Asthana's yet untitled romcom. The newest entrant is Aashiqui 2 fame Aditya Roy Kapur who has just signed a film with Yash Raj Films."

Another relative newcomer who stays on to be a constant factor with YRF is Parineeti Chopra who at last count is doing at least three films with them.

"As for a biggie with an established superstar, there is Hrithik Roshan's Paani being made in collaboration with Shekhar Kapur. Also, Rani Mukerji is the central protagonist in Mardani. However, for all practical purposes, it is this bunch of half a dozen newcomers on whom YRF is betting on. With Ranbir Kapoor already leading from the front, these are going to be the superstars of tomorrow," the source adds.