Ranbir Kapoor's All Stars team won their football match in Pune on Saturday. The star of the match was his cousin Aadar Jain, who won an award for also scoring the goal of the match. Looks like love for football runs in the family. Ranbir always has been pretty enthused about football and one sees him practicing regularly in the city. He is usually joined by Aditya Roy Kapur and Kartik Aaryan among others. 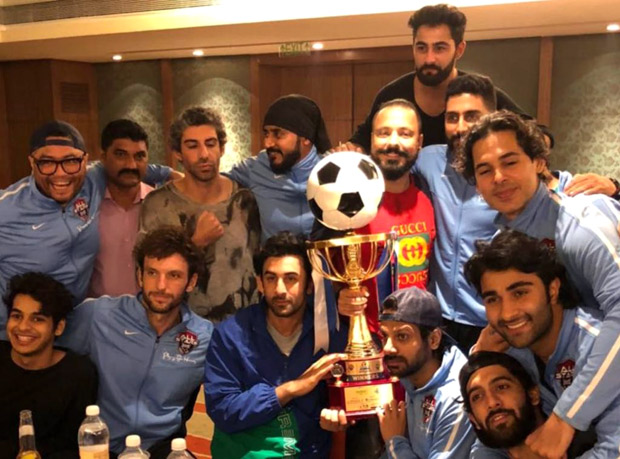 On personal front, he is a lot in news because of his confession of being in a relationship with Alia Bhatt. Thanks for his tell all interview in a magazine, his love life has once again come into limelight. Ranbir Kapoor has dated two most popular and successful actresses in Bollywood: Deepika Padukone and Katrina Kaif. In fact, Kat is Alia’s gym buddy and has also come on a chat show with her. Ranbir’s professional life is also going well at this point given that his recently released Sanjay Dutt trailer has garnered rave reviews. The movie will come out on June 29 and is touted to be one of the most awaited films of the year.

After Sanju, he willl be seen in Ayan Mukerji's Brahmastra and Yash Raj Films’ Shamshera. Stay tuned for more updates on Ranbir Kapoor.

Also Read: “Shamshera is a dream project” – Vaani Kapoor on being paired opposite Ranbir Kapoor