Actor-politician Pawan Kalyan, who will be contesting the elections this year, has been busy campaigning for the same for quite some time now. But according to the latest post shared by Ram Charan on his official Facebook page, the health of the politician has worsened and the RRR actor decided to take to social media to inform everyone about the same. Ram Charan recently paid a visit to his uncle’s house owing to his health. 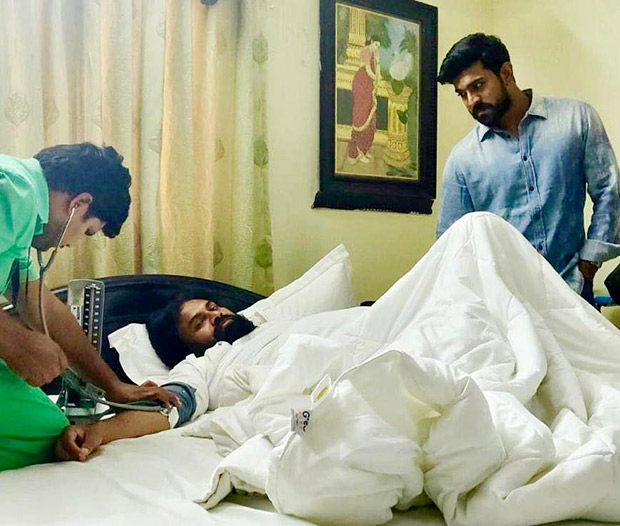 Ram Charan, who is busy shooting RRR with Junior NTR and Rajamouli, decided to take a break from his hectic schedule and took time out to visit Pawan Kalyan who is currently unwell. Posting a picture of the actor politician resting, as Ram Charan visits him, the latter also had a special note informing everyone about Pawan Kalyan’s health. In the note he said, “Just met Jana Sena Chief Pawan Kalyan Garu, a Leader I admire the most, at his residence in Vijayawada. He is extremely weak & dehydrated. Doctors have advised him to completely stop his election campaign in this extreme heat.”

He went on to add, “However, due to his political commitments and shortage of time, he has decided to go ahead with his campaign in Anakapalle and Pendurthi today. The doctors have insisted on accompanying him on his campaign, but he has politely declined their offer. Wish him a speedy recovery and all the success for his service to the people.”

If reports are to be believed, Ram Charan too is expected to join uncle Pawan Kalyan in the latter’s election campaign. In fact, along with him actors Allu Arjun and Varun Tej too are expected to be a part of it.