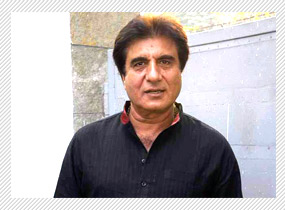 Raj Babbar just lost his father, days before his son's wedding in Jodhpur creating an awkward situation for both the girl's and boy's families.


However, Rajji admits that it was his son's future in-laws who offered to postpone the wedding in the light of the bereavement in the Babbar family.


Says the soft-spoken actor-politician, "It was very nice of them to offer to postpone the event when so much of preparation had already gone into the event. All the guests had been invited, a lot of money spent. We felt awkward even to ask for such a thing (the postponement of the wedding). I didn't have the heart to suggest a postponement. I instead suggested a very quiet wedding. But they are very cultured and understanding people. They suggested that we push the wedding date ahead because of the death. It was most gracious of them."


Raj agrees the postponement was a big blow to both families. "But the relationship between a grandfather and his grandson is very special. Arya was very attached to his grandfather. His Dadaji was a diabetic. So his legs had gotten weak. He promised to attend Arya's wedding saying. 'Main physio-therapy kara raha hoon. Tere shaadi main daud jaaonga.' After the death I never said anything to the bride's family. They decided to voluntarily push the wedding forward. Luckily the bride's family has a lot of understanding relatives and friends."


As a son, Raj Babbar is at a loose end at the moment. "He was 84. Whatever the age, a father is a father. And his going away is a big loss. I suddenly feel older."


Ironically, Raj will be seen in what he calls the funniest film of his career at a time when the family is slipped into mourning. "Life goes on. And so does the laughter. In Khiladi 786 I have a very funny role. I've never done broad comedy since Tajurba (with Smita Patil) in 1981. So I am doing comedy after three decades."


Raj says it wasn't difficult because every actor was in the mood of gaiety. "I am happy with the film and my role. I enjoyed doing it. When I was dubbing I was laughing more than speaking my lines. We were all swept into the comic design. Everyone had to be flamboyant. I have always been a subdued actor. Adapting myself to this new style was an interesting challenge. When Himesh Reshammiya narrated my role over the phone I had readily agreed to do it. Himesh is a good friend. I can never say no to him."


Says the politician-actor, "I try to be a good human being. Over the years the only wealth I've accumulated is the goodwill of the people."