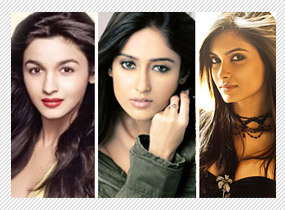 With 2012 coming to a close and only two notable films (Khiladi 786, Dabangg 2) waiting for release, the countdown has also begun to hail best female debutant of the year. While amongst males it is a tough battle already between Arjun Kapoor, Varun Dhawan, Ayushmann Khurrana and Sidharth Malhotra, it is much tougher for the females.

"This has turned out to be a year when abundance of talent has emerged. It is a good sign for the industry because everyone from Alia Bhatt to Ileana D'Cruz, Diana Penty and Huma Qureshi has made a place for herself", says an industry veteran.

What is also noticeable is the fact that except for Alia Bhatt (Student of the Year), no one else got a traditional start in Bollywood. Ileana and Diana played married women (Barfi!, Cocktail) while Huma started off in a gangster flick (Gangs of Wasseypur) without turning into a moll.

On the other hand, others like Esha Gupta (Jannat 2, Raaz 3) and Yaami Gautam (Vicky Donor) may not have played a central protagonist per se but their films worked at the box office.

"An unlikely contender could well be Farah Khan (Shirin Farhad Ki Toh Nikal Padi). However with the choreographer-turned-director stating that this was her first and last 'heroine' escapade, her candidature in the nominees is very unlikely", quips an actor.

However, one can safely say that if only Parineeti Chopra wouldn't have played a second lead in Ladies v/s Ricky Bahl last year, her performance in this year's Ishaqzaade would have easily swept away all the awards for the best debutant. Still, for now, she would have to see a contemporary of hers walk the red carpet when the award is announced.