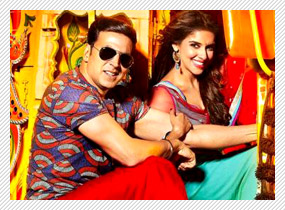 What can be said about a film where a couple named Mili and Bhagat conspire to bring their employer's empire down?


The formula is simple. And stark. Get the audience to laugh at any cost. And some of it does work quite well. Shukriya.


We have a hero, no make that a super-duper-hero, who flies across the air, pounds automobiles to a pulp with his bare fists, breaks down a jail cell's stone walls with a flick of his manly fist, gets goofy or gooey-eyed depending on his co-star on screen.


Akshay's crazily improvised performance as a sham cop borrows dollops from Salman Khan's Dabangg and Akshay's own Rowdy Rathore. The derivative derring-do doesn't diminish the impact of the italicized antics that range from the arresting to the exasperating.


Sample this. Asin (back in fetching form for the first time since Ghajini) loves a lout who is chronically incarcerated. Each time the jailed loverboy (Rahul Singh, well-cast effectively played) is about to be released he's sent back packing for some unintentional crime or the other.


The script seems to be written by someone who loves Akshay Kumar's humorous heroics and his emphatic but spoofy hijinks. Both the traits are amply accentuated in the script. Khiladi 786 ultimately becomes a showcase for its insanely successful superstar hero's talents. Akshay as we all know , loves to play the Punjabi Devdas. He did it effectively in Vipul Shah's Namaste London where he stepped back gallantly to let his wife Katrina Kaif make a fool of herself with an undeserving boyfriend.

Exactly the same triangular situation crops up in the second-half of Khiladi 786 when midway through the anarchic hilarity Akshay decides to play the bleeding teary-eyed martyr "gifting" Asin to the aforementioned jailed jerk.


Mamta Kulkarni in the early Khiladi film Sabse Bada Khiladi had done the airheaded lover girl running after the wrong man. Back then Akshay stood guard over Mamta with the same steadfast loyalty as he does for Asin.


Some things never change in our cinema. Heroines may come and go. Heroes live on forever.


A sense of continuity runs through all of Akshay Kumar's comedies. He doesn't do anything here that he hasn't done before. The trademark goofy grin and the self-deprecating humour are back. Here, the hero is desperate to get married. That's a sporting part whose subtext screams, 'Look, I am such a big star and I play a character who can't get a woman to marry me, ha ha.'


It's all done in fun, with plenty of unzippered zest and a comforting absence of vulgarity. The ensemble cast particularly Mithun Chakraborty and Raj Babbar, catches on to the shrill sur of a music that suggests a blend of parody and homage to the Formula Cinema . So we have long-lost brother of the hero showing up in the climax with a mocking mawkishness that Manmohan Deasi would have approved of.


The music by Himesh Reshammiya is splendidly in-sync with the film's wacked-out mood. He often uses standard background effects from old Hindi films to remind us that we are laughing at conventions that never grew outdated in our cinema.

Oh yes, Reshammiya also plays an important part in the film as a hopeless inept wedding planner. It's good to see Reshammiya doing a Gujju act. He was born to play Mansukh.


As for Akshay Kumar's Khiladi act, he can do the parodic paces blindfolded. Adding adrenaline to the antics are the crashing, tumbling somersaulting cars provide thrills in a very Rohit Shetty way.


Wondering if Mishra got the wrong Gol Maal. And did he mean Ajay Devgn instead of Amol Palekar?


Khiladi 786 is an oddball of a dhamaka that blends slapstick with stunts. It is farcical fun from first frame to the last. Go, have a blast.