Not too long ago, social media was abuzz with photos from the Diwali celebration of Nickyanka. This Diwali was quite special for the couple since it was their first after the arrival of their first child, Malti Marie Chopra Jonas. Priyanka Chopra and Nick Jonas celebrated it in a traditional manner and the Laxmi Puja celebrations were also attended by Chopra’s mother Madhu Chopra. Amidst the festivities the couple decided to take some time out to meet some friends including Warda Nadiadwala. 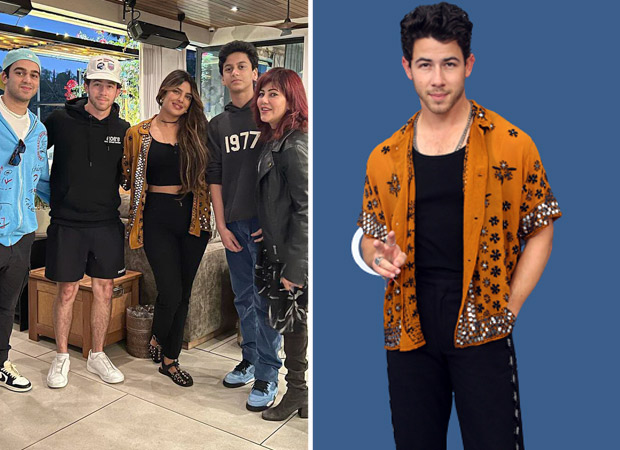 Priyanka Chopra and Nick Jonas met Warda Nadiadwala, wife of popular filmmaker-producer Sajid Nadiadwala in Los Angeles, US. The couple met her and their children and photos from their get-together were shared by Warda on her social media. She posted on her Instagram, captioning the photos saying, “LA link up with our dearest Yanka @priyankachopra and her beautiful family ??????…..@nickjonas @sknadiadwala @snadiadwala1” While fans were thrilled to get an update on what Nickyanka have been up to, some of them started noticing the outfit worn by Priyanka, by comparing it to something that Nick Jonas wore quite some time ago.

Priyanka Chopra opted for an all-black look by adding a mustard shirt as a pop of colour. This mustard shirt was the same one that Nick Jonas had sported during the 50th anniversary event that was held by the Board of Directors of Cedars-Sinai. Fans couldn’t stop gushing over the way this wife stole her husband’s shirt with many of the speaking about how wives often raid their husband’s wardrobe.

While one fan commented, “The accuracy of Marriage = wearing/stealing husband clothes and take photos with it,” another one said, “Pri looks sexy in his clothes.” One fan also dropped a comment saying, “A family that stays and prays together shares clothes too.” “She loves wearing his outfits,” added another.