This year’s Diwali celebration seemed low-key for star couple Priyanka Chopra and Nick Jonas. However, it was indeed special because it was their first Diwali with their daughter Malti Marie Chopra Jonas. After Nick Jonas, now Priyanka Chopra has taken to her official Instagram handle to drop photos giving a sneak peek into the couple’s Diwali festivities with Malti. 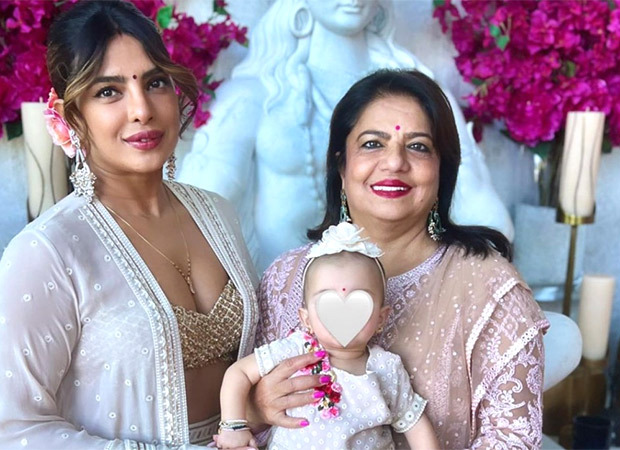 In the photos, Nick, Priyanka and Malti can be seen performing rituals and Diwali festivities, while Chopra’s mother Madhu also joined the celebration. Captioning her social media post, the actress wrote, “Love, peace and prosperity to all. From a heart truly laden with gratitude, I wish you all a Happy Diwali.”

The Don actress concluded her short write-up by adding, “Sorry I’m a little late but decided to stay in the moment just a little bit longer.. / From ours to yours. Love and light.” As her brother Siddharth Chopra did not attend the Diwali pooja, the actress mentioned, “PS: missed u.”

As soon as the Bajirao Mastani actress shared the photos, her fans went gaga over them. A section of them flooded the comments section with red-heart emoticons.

Nick Jonas too, took to social media earlier to share photos from their Diwali celebrations. While the first photo saw Nick, Priyanka and Malti twin in white as he carries his daughter in his arms, the second photo shows Malti sitting on Priyanka’s lap as she performs the puja. Meanwhile, Nick is holding her hand in the photo. The caption of his post read, “Such a beautiful Diwali celebration with my. Happy Diwali everyone. Sending joy and light to you all. #diwali”.

Coming to PeeCee’s professional front, she has a couple of Hollywood films as well as the space sci-fi drama Citadel, which will release on Amazon Prime.

Also Read: Janhvi Kapoor recalls how Sridevi threatened Boney Kapoor to make him give up smoking: “she risked her own health”