They say exes can be good friends and it is true in case Hollywood pop stars Miley Cyrus and Nick Jonas. They dated during their teenage years while  Miley was starring in Disney show Hannah Montana and Nick was in his Jonas Brothers band and Jonas show. Over a decade later, the two of them are happily married in their lives. Nick Jonas married our desi girl Priyanka Chopra whereas Miley Cyrus got hitched her longtime love, Liam Hemsworth. And it seems Priyanka is pretty chill about her husband Nick and ex-girlfriend Miley’s friendship as well. 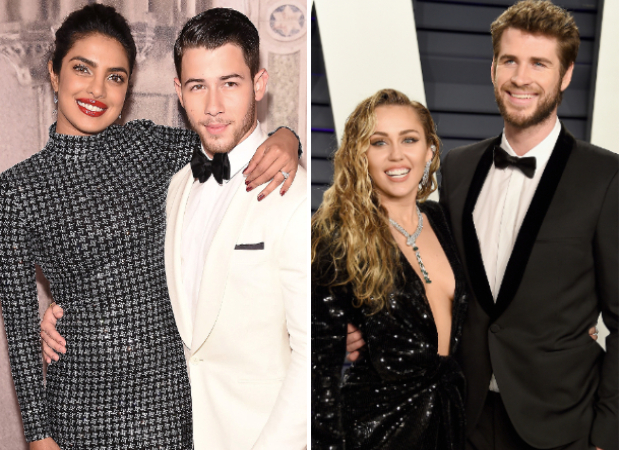 Interestingly, Priyanka Chopra and Liam Hemsworth starred in Hollywood romantic comedy Isn't It Romantic which released in February. And it seems Priyanka Chopra is pretty chill about her husband and ex-girlfriend Miley’s friendship as well. She was asked a question by a fan about how she feels about Nick and Miley's friendship, what is her relationship like with Miley and whether they would go on a double date with Miley and Liam someday. "We actually talked about that doing a double date at some point. It was fun. I have met Miley just a couple of times but she's amazing. She has shown so much support to Liam and the movie while we were doing promo and Liam was unwell. I am a fan because her music is amazing and you can't deny that. I hope that will happen. I love Liam, he's a great guy. So, I am sure it would be a fun group to go out with for double date."

Recently, Miley Cyrus shared a series of throwback posts during which she shared a photo of herself from her teen years rocking a Jonas Brothers t-shirt with her youngest sister Noah Cyrus. She sent that photo, shared by her fan club, to Nick via direct message on Instagram. Nick responded by saying, “Amazing. These throwback shots have been.” Without leaving a chance to make fun of the moment, Miley shared a screenshot of her Instagram DM and wrote, “That moment when even your ex knows your socials have been.” Priyanka Chopra also joined the praise bandwagon and had replied on the post, “Lol..Hahaha. Hubby is right. These posts are.”

Priyanka Chopra had earlier praised Miley Cyrus after the premiere of Isn’t It Romantic last month when she represented Liam Hemsworth. Her husband was in the hospital and couldn’t attend the premiere. Priyanka had thanked her for attending on his behalf.