Venturing into the new zone of production, Madhuri Dixit is definitely more than happy to take up this role. Now that the pre-production for her film 15 August are done, the film went on floor a day ago. And Madhuri decided to kick off her first Marathi production by giving its mahurat clap. 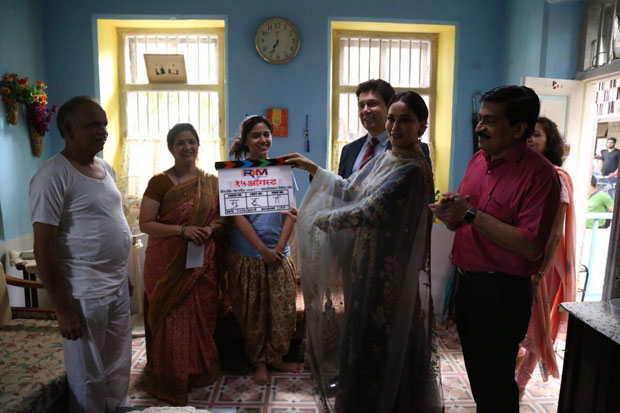 Madhuri Dixit is quite active on social media and often updates her fans about her forthcoming ventures. Doing the same for her debut production 15 August, she posted a picture on Twitter. The actress was seen posing alongside the actors of her film as she gave the mahurat clap. She also captioned this image saying, “Excited to get the chance to step behind the camera for our first RNM movie production.”

Accompanying her in this venture is also her doctor-husband Sriram Nene. He too was present during the mahurat. If reports are to be believed, Madhuri’s husband too will be helping her in her recent production venture. The film kicked off in Mumbai itself as it is set against the backdrop of chawl life.

Although there aren’t many details on the film, it is being said that 15 August is a slice-of-life drama. Earlier, Madhuri Dixit had described the concept of the film stating that it comes with a message. The film intends to spread the message that freedom is a gift that only you can gift yourself.

Interestingly, while venturing into Marathi cinema as a producer, Madhuri Dixit will also be making her acting debut in the same industry this year. In this film, she will be seen alongside her Hum Aapke Hain Koun co-star Renuka Sahane in Bucket List.

Speaking on her Bollywood ventures, Madhuri Dixit recently replaced the late Sridevi in Abhishek Varman’s next. She decided to step-in after the untimely demise of the Chandni actress.

Madhuri Dixit unveils a teaser of her first…