The newlyweds, Priyanka Chopra and Nick Jonas, have been the talk of the world ever since they began dating early this year. Their big fat two-day wedding in Jodhpur was highly covered by Indian and international media. Priyanka and Nick tied the knot on December 1st in a Christian service and this was followed by Hindu ceremony on December 2nd at the Umaid Bhawan Palace in Jodhpur. 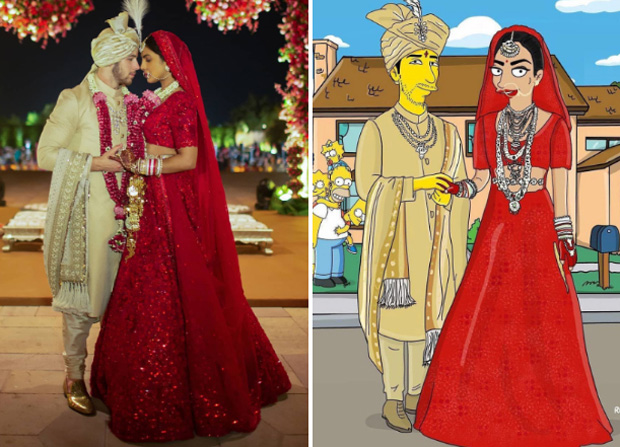 But, if you think that the buzz around the Nickyanka wedding is over, then you are wrong. Their wedding got the most amazing makeover which Priyanka absolutely loves it. While the couple is enjoying their Christmas holidays in London with their families, Priyanka shared a couple of pictures on her Instagram of her wedding illustrated as The Simpsons characters. It looks like the newlyweds fit well as the residents of Springfield.

It is known that The Simpsons is one of the longest running shows in America. And to be illustrated as the characters is in itself an honour. Sharing the pictures on her timeline, Priyanka captioned it, "Love #simpsons."

Meanwhile, after the London celebration, the couple reportedly will fly off to Switzerland on their honeymoon. In January end, they plan to throw a huge bash for their Hollywood friends and the guest list includes Dwayne Johnson, Ellen DeGeneres, Kerry Washington, Meghan Markle among others.