Last Updated 19.05.2022 | 11:53 PM IST
feedback language
follow us on
Bollywood Hungama » News » Bollywood Features News » This photo of Ranbir Kapoor and Amitabh Bachchan from the sets of Brahmastra is taking the internet by storm!

Ranbir Kapoor, Alia Bhatt and Amitabh Bachchan are coming together for the first time in the forthcoming Dharma Productions superhero drama Brahmastra.  Photos and BTS posts of the film are often shared by filmmaker Ayan Mukerji who made his debut in Instagram a few months ago. Amidst the glimpses and sneak peeks he shared, we came across this picture of Ranbir and Amitabh that seems to have gone viral. 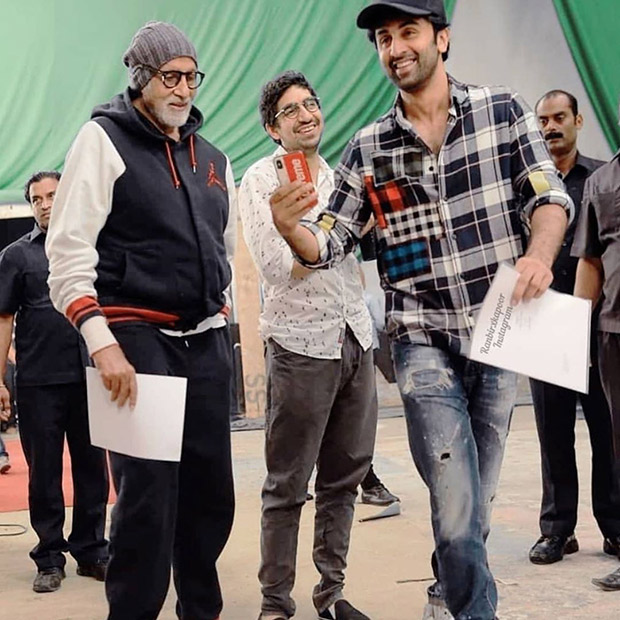 This photo of Ranbir Kapoor and Amitabh Bachchan from the sets of Brahmastra is taking the internet by storm!

In the said photo, we see Ranbir Kapoor and director Ayan Mukerji sharing a hearty laugh as Amitabh Bachchan smiles on. We also see the strict security accompanying the actors on the sets of Brahmastra.

Just a few days ago, it was seen Ranbir Kapoor and Alia Bhatt had kicked off a new schedule in Varanasi. Photos of the two of them shooting atop a boat went viral across social media. Pictures from that shoot continue to grab attention on every platform.

On the work front, Ranbir and Alia are coming together for the first time in Brahmastra. The two, who are also dating in real life, are expected to be seen in a never-before-seen avatar. Also starring Mouni Roy, Nagarjuna amongst others in pivotal roles, the release of Brahmastra has been shifted to summer 2020. Based on Indian mythology, the film is the first of the superhero trilogy.