Sonakshi Sinha is one actor who does not take social media lightly. She has a huge fan following and she takes care not to disappoint them by updating them about her life all the time. Recently, she posted a hot pic of herself which got her many likes on Instagram. Amongst all comments, there was one comment which got everyone’s attention. Varun Dhawan posted “Bhabhi” on the picture. That sure led to a lot of speculation of who must Sonakshi be dating now! In Koffee With Karan show Varun candidly said that Sonakshi should date Aditya Roy Kapur. Varun and Sona made a public appearance at an event recently and  we got hands on their BTS fun as well. Here, Varun is pulling Sona’s leg by handing over her shoes and then touching her feet but Sonakshi, like us, is interested in one thing. She asks him playfully, “Can you tell me what is this hornet’s nest you have stirred on Instagram by calling me Bhabhi first?” 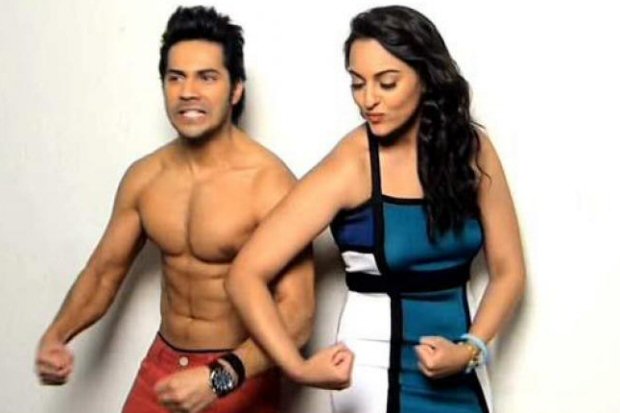 Varun Dhawan is in fun mood as he refuses to answer the question but keeps on smiling stupidly. Wow, even we want to know if Sonakshi Sinha is dating Aditya. That sure be such a good news for all their fans. They have been paired opposite to each other in Karan Johar’s Kalank. Varun Dhawan too is a part of the movie and he will star opposite Alia Bhatt in the same. The movie also has a senior couple: Sanjay Dutt and Madhuri Dixit.

Varun Dhawan was in news for making his relationship with Natasha Dalal official on Instagram. He plans to marry her soon, he said on Koffee With Karan.

Also Read: Oo La La! Sonakshi Sinha’s bare toned abs have us dazed on the cover of Cosmopolitan this month!