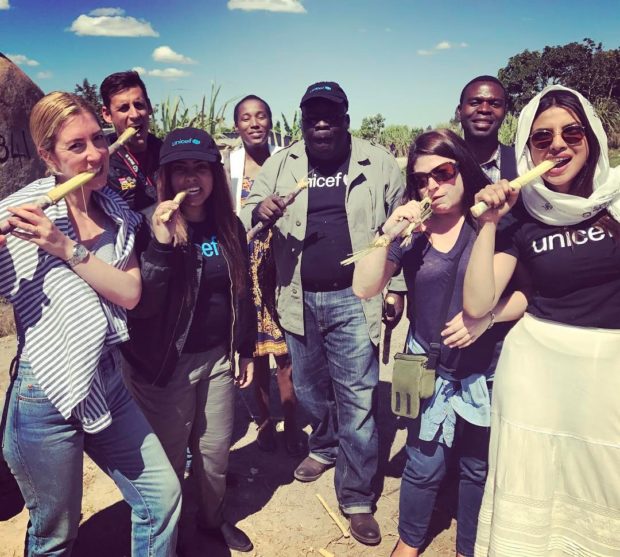 With the whole world at her feet, there is hardly anything that the stunning Priyanka Chopra cannot achieve. Ever since the time she bagged the prestigious beauty crown, there has been no stopping this Chopra girl, who has been incessantly bringing laurels to not just her repertoire, but also to the whole of India.

Being the ‘UNICEF Goodwill Ambassador’, Priyanka Chopra has travelled extensively to many places. The latest one being Zimbabwe, where she had gone recently to participate in the ‘End Violence Against Children’ campaign, something that we had reported lately. Priyanka Chopra posted the adjoining photograph on the social media wherein she is seen alongwith a whole bunch of team members of the UNICEF, all of whom are seen eating sugarcane, as taught by our very own Priyanka Chopra. Priyanka Chopra captioned the photograph as “So I gave them all a lesson on how to eat sugarcane(ganna)!! Team #UNICEF in Zimbabwe taking a sugarcane break.. it was sooo good! Took me back to Bareilly! @victorchinyama @mbuckanoff@danasupnick @jenn_din and my Zimbabwean friends”.

On the films’ front, while Priyanka Chopra is yet to make an official announcement about her next Bollywood film, she is all set to storm the silver screens with her much awaited Hollywood flick Baywatch, wherein she will be seen playing the antagonist Victoria Leeds. Directed by Seth Gordon, the film also stars Dwayne Johnson and Zac Efron, and will be releasing on May 25 this year.