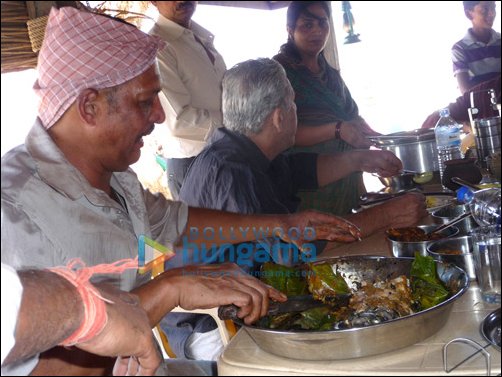 Rajpal Yadav, Shreyas Talpade, Asrani and Shakti Kapoor among others, have a taste of the traditional fish

dishes, straight out of his motherâ€™s recipe book.

Nana has learnt the traditional recipe of the mouth-watering dish, powered by his motherâ€™s traditional masala

(comprising of over 42 ingredients), which he used to cook the meal for the cast and crew on the sets.

What is interesting is that, contrary to Nanaâ€™s jovial and easygoing personality, his character in Malamaal

has actors of the ilk of Om Puri and Shreyas Talpade among others.

Says producer Shailendra Singh, â€œWe wanted to look beyond the star culture, to look at a league of extraordinary

gentlemen, extraordinary actors, who would bring their own flavour and add value to the script and I think, we have

come up with the perfect cast.â€

Nana Patekar feels that it is Priyanâ€™s spirit that makes the vital difference. â€œPriyan and I had planned so many

films, but it feels so good when one film happens. More than anything else, I love to act and leave the rest to my

director. That is what happens with Priyanâ€, enthuses Nana.

Watch: Shakti Kapoor breaks down in…