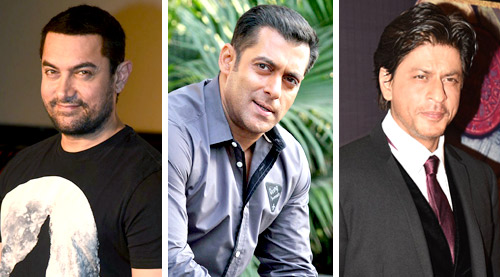 The recent announcement of Aamir Khan, Salman Khan and Shah Rukh Khan-in order of seniority-working (that too in a possible Amar Akbar Anthony remake) in Sajid Nadiadwala's next directorial has left everyone more skeptical than stunned by this biggest breaking news of them all!

While print-space is lapped by eulogies of the three Khans for being one in spirit and forgetting whatever perceived differences exist/existed between Aamir-Shah Rukh and Salman/Shah Rukh, and speculations of unprecedented business are made by believers, if this movie actually happens, the news has not yet created the frenzy it should have: for the same reason that it seems a true-blue mission impossible!

What about the fact, for example, that Aamir Khan takes up only one film at a time and Salman's and Shah Rukh's schedules?

The more knowledgeable skeptics point to the great announcement around 1977 of a Salim-Javed (then the iconic names in film writing) film directed by Vijay Anand and starring (again in order of seniority) Dilip Kumar, Raj Kapoor and Dev Anand, the original Top Three of Hindi cinema who appeared in the '40s and ruled till the late '60s together.

At the time when the film had been announced, Raj Kapoor was well past his prime and had already done some character roles in Do Jasoos, Khaan Dost and his own productions Kal aaj Aur Kal and Dharam Karam. Dilip Kumar had also lost his commercial standing, with his triple role in Bairaag (of a father and two sons) looked upon as an attempt to rejuvenate his career by keeping his options open as old man or romantic hero, while Dev Anand was the only actor whose films Amir Garib, Warrant and Jaaneman had done either well or very well (Amir Garib) and with whom films in the lead were still being announced.

In short, this imbalance of status and images clashed and would have needed a truly unique script that gave them equal scope and-knowing Dilip Kumar and Dev Anand-equal screen time! With Vijay Anand being Dev's brother, there was an uncertain angle too for the other two, who had both ceased being romantic heroes by then.

Of course, with the Khans, all born in 1965 and at comparable and high levels of popularity still, that too as leading men, the scenario will be in that sense simpler. But it will also be difficult in terms of their die-hard fans, who are so hyper when it comes to who's the best and top Khan of them all.

Above all, in such cases, the supreme aspect will usually be the cost of production vis-Ã -vis expected returns, which includes the Khans' fee (or fee and share of profits!) structure. This is a major reason why the multi-star films have dwindled-after all, Aamir and Salman collaborated 21 years ago in Andaz Apna Apna, while Salman and Shah Rukh had Karan Arjun, Hum Tumhaare Hain Sanam and extended cameos in each other's films, Kuch Kuch Hota Hai and Har Dil Jo Pyaar Karega. In their times, Dilip Kumar had done Insaniyat with Dev Anand and Andaz with Raj Kapoor, but like Aamir and Shah Rukh, Dev and Raj had never come together!

But, as Akshay Kumar recently pointed out, it was not just the fees (which can be compromised) but a lack of mutual trust that has led to film buffs being deprived of multi-star films, a trend that had taken off with Roti Kapada Aur Makaan, Deewaar and Sholay in the mid-'70s.

In short, quality and audience appeal were paramount as always. Many of these films had imbalanced scripts, with the topmost hero in the cast getting more footage. Others, like Kaala Patthar and Shaan had exorbitant costs, and most of the flops (which became disasters simply because of the scale) had pedestrian scripts. Even some of the hits did not necessarily have outstanding cinematic merits.

In short, proposals were in, and this continued well into the '90s till film stars would work in multiple films at a time and worked many shifts in the old work-ethic.

And if the three-Khan deal and film works, this is what Sajid Nadiadwala should compulsively avoid-a please-all proposal and a project that is only designed only to bring in the three biggest stars of today!

Having said that, let us examine some of the impossible combinations we have seen, and then go to those movies that were announced but never took off for an obvious combination of all factors that are needed for films with big names: economic viability, and a skilled script that needed the specific stars, rather than making a splash with the 'grand announcement' by merely fitting in stars to make a 'market proposal'.

Here are some mega-biggies that were made and clicked:

And here we go to some of the spellbinding announcements of films that were finally never made as the scripts presumably never worked out and discretion became the better part of valour:

And just to round off, here are those few movies in which star cameos outranked the cast-Hrishikesh Mukherjee's Guddi, Manmohan Desai's Naseeb and Farah Khan's Om Shanti Om!