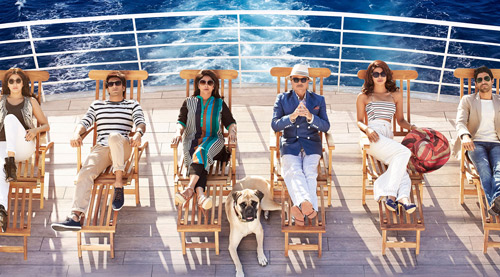 1. Anil Kapoor was not sure he wanted to play Ranveer Singh and Priyanka Chopra's dad, especially since director Zoya Akhtar wanted him to sport a totally grey mop of hair. Anil finally agreed...To the role and the grey hair.

2. An interesting bit of role swapping: Anil's wife was to be played by Tabu. And Shefali Shah was to star in Meghna Gulzar's Talwar. But then Tabu decided to do her buddy Meghna's film and Shefali stepped into Tabu's role in DDD.

4. Ranveer-Priyanka as siblings seemed dicey, what with the two playing husband and wife in Sanjay Leela Bhansali's Bajirao Mastani. But Zoya and Farhan convinced them to go for it. From raksha bandhan to kaurva chauth is this dare pair's journey this year.

5. Ranveer Singh and Priyanka Chopra's sibling bonding is based on real-life siblings Farhan and Zoya Akhtar. Zoya Akhtar has so far directed 3 films. All 3 star her brother Farhan.

6. Kareena Kapoor was supposed to play Priyanka Chopra's role. But when Ranbir Kapoor opted out Kareena too said no to the film. She didn't want to play Ranveer's sibling.

7. Farhan and Priyanka agreed to sing their own duet in DDD. Later, breaking their own rule that they will only sing for themselves, they allowed other members of the cast to also lip-sync to
PC and FA's voices. Sporting is what we say.

8. The film was shot on board a luxury cruiser sailing along Europe. None of the 25 principal actors was allowed to carry along his or her staff. Austerity during times of unimaginable luxury!

9. Films shot on board luxury ships have not been particularly successful in India. Ajay Devgn directed U Me Aur Hum and Indra Kumar's Mann are examples of films which located a lot of the drama on a luxury cruiser.

10. Zindagi Na Milegi Dobaara had boosted tourism in Spain. Dil Dhadkane Do is likely to boost the volume of vacationers on cruise ships. Titanic notwithstanding.