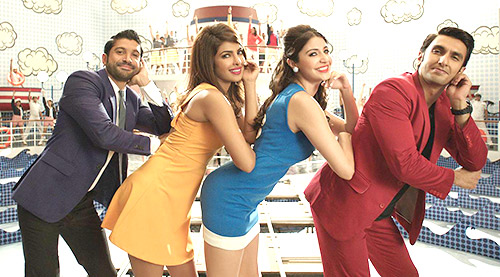 Mid-ocean, Anushka Sharma, playing an on-cruise dancer named, hold your breath Farah, decides to take a dip in the pool. As Ranveer Singh, the spoilt aimless rich brat (like Hrithik in Lakshya) watches her with famished eyes , one is reminded of Rishi Kapoor's eyes making love to the water nymph Dimple Kapadia in Ramesh's Saagar.

That was another era, another aura. The vibes in Zoya Akhtar's third feature film are distinctly here-now-and-matter-of-fact. A very charismatic gallery of actors slip into their roles with the fluent ease of swimmers who have been in the ocean so many times, they know exactly when the sharks are awake.

Dil Dhadakne Do is a film about trying to follow the unpredictable rhythms of the song of life . It's a very elitist film. Oh, yes! The problems faced by the rich going on bankrupt, Mehra family are peculiar to the privileged classes. In fact in one of the film's funniest scenes-and there are countless of those, let me assure you-Priyanka's hypochondriac mother-in-law (Zarina Wahab) asks the younger woman what the problem is after her Bahu says she wants to leave her husband because she is not happy in the marriage.

"Problem kya hai?!" the bewildered mother-in-law asks. And she may well have a point. Priyanka's husband Maanav (Rahul Bose, giving cogency to a thankless role) doesn't beat her up, "allows" her to work, and lets her be.

The dialogues by Farhan Akhtar (who enters at intermission-point in a pitch-perfect heroic avatar) are savagely wise and profoundly unforgiving of the characters' self-centred cloistered world of wealth and extravagance and spiritual nullity. When Farhan's character of the world-weary journalist lectures Priyanka's husband on gender discrimination, you listen because the guy makes sense and he makes sense because he's played by Farhan Akhtar.

Barring Priyanka Chopra who tends to ham in the dramatic scenes, every actor shines, some brighter than others. Anil Kapoor as the Mehra patriarch-- ridiculing his wife for her food habits, treating his brother as a hired staff, pushing his daughter into a loveless marriage , pushing her lover away to America, and slotting his son as a reluctant heir apparent-spins the kind of performance that is tragic turbulent anxious and funny.

But it's Shefali Shah as his trophy atrophied wife who nails her part the best. She brings to her character an unfussy pitch-perfection rarely seen in mainstream cinema. Shefali provides the most heartbreaking moment to the irascible plot when towards the end she sits crumbled on the master bedroom and tells her husband, 'You forgot me'.

This moment comes right after the great confrontation, brilliantly written and performed, in a hospital room where the Mehras' heir-apparent accuses his parents of living in a sham marriage.

Watch how Ranveer Singh and Anil Kapoor play against one another without trying to be one up. The two actors are a treat to watch.
Ranveer Singh comes into his own with this film displaying the ability to get into character without bringing in the unnecessary baggage of his nervous energy. Priyanka Chopra in the crucial role of the Mehras' unhappily married daughter looks more like a character from Ekta
Kapoor's saas-bahu serial. She sticks out like a sore thumb in a cast where every actor dives into the ocean with a swimmer's fluent grace, even debutant Ridhima Sud who along with TV actor Vikrant Massey does a tongue-in-cheek Titanic on Zoya's angst-no-thanks cruise.


Anushka Sharma has little to do. And she does it effectively.

The real star of the film is Carlos Catalan's cinematography. This guy is a magician behind the lenses. Some of the most scenic spots in the Mediterranean are captured as a striking but supplementary backdrop to the storyline. The stunning locales never look touristic.

Reema Kagti and Zoya Akhtar's writing penetrates to the heart of the patriarchal system. The writing rips the veneer of sophistication off these wealthy characters, shows them stripped to the soul and yet, miraculously Zoya's film never ridicules them. She loves her characters. But she isn't blind to their fatal flaws, nor forgiving of them.

Her use of sound-or rather the lack of it-is largely unheard of in modern mainstream cinema. Where other filmmakers would have punctuated and hammered in the drama of the dysfunctional family with pounding background music, Zoya refrains and abstains. She strips the soundtrack of noise, reveling in the shrieking silences of souls tormented by such existential dilemmas asâ€¦ what to wear for the party in the evening, how to sneak into a lover's room without getting caught, how to tell that aunty on stage that her singing is an embarrassment.

Oof, life! Did Zoya say the last time Zindagi Na Milegi Dobaara? She proves herself wrong by giving her creativity one more chance to blossom, this time mid-ocean with characters that would have been utterly tragic were they not so funny. Here in one corner of the universe she takes us on a smashing cruise into the lives of a smashed-up elitist family.

Zoya Akhtar once again proves herself the master of dysfunctional self-serving relationships. With a welter of witty words and a profusion of pungent situations(barring a contrived climax) the narrative glides across a shipload of shipwrecked characters played by actors who can peer into their restless characters and see how ridiculous they are beneath their posh exteriors.

Dil Dhadakne Do is a film that could have been noisy messy and crowded. It ends up being just the opposite.

As Aamir Khan would say for the Mehras' canine Pluto, "Bow wow!"