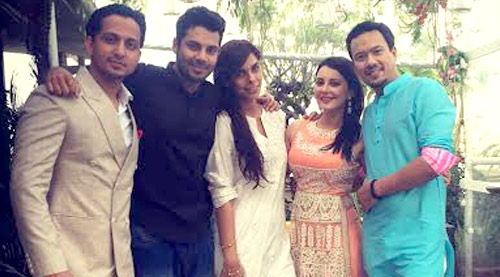 The pretty actress Minissha Lamba is no longer officially single. She tied the knot on July 6 with her boyfriend, restaurateur and club owner, Ryan Tham.

Speaking on the wedding Minissha says, "I've been dating Ryan for some time now. And I think I know him well enough now to know he is the one I want to spend my life with. Once we were sure of one another's feelings we saw no reason to delay the wedding."

Discounting all rumours of a sudden wedding Minissha Lamba says, "No, it wasn't a sudden wedding at all. We were planning to tie the knot for some months. It's just that we didn't want to talk about it."

It was Ryan's cousin Pooja Bedi who announced the wedding on twitter.

Laughs Minissha, "We suddenly started getting all these congratulatory messages. We were wondering where that came from. Then we got to know it was Pooja who had announced the wedding. She's such a warm and generous person."

She is all for her new husband's family. "They are wonderful people. And the best part is that my parents and his parents get along really well. So that's an added bonus to our alliance."

Minissha reveals what attracted her to Ryan. "He just ignored me in the beginning. Didn't treat me special just because I was an actress. He had not seen much of me on screen. In fact the only film of mine that he has seen so far is Bachna Ae Haseeno. I didn't bother to show him my other films as we got to know better because I had already seen my better films many times over. Maybe we'll now catch up with some of my other films together. But when I first met him I was fascinated by how normally he treated me. Gradually I got to know him better. He seemed to possess all the qualities that I wanted in my man."

Now that they're married Minissha wants to spend quality time with her new husband and his family. "I've naturally moved in with him now. As for my career in the cinema, I've to confess that the roles coming my way have stopped being interesting. Of course I'll continue actingâ€¦once an actor always an actor. But I'll only do roles that offer me a chance to do something worthwhile."

In the meanwhile there is plenty to be done in her new real-life role as a wife. Minissha says the wedding was an intimate family affair. "But we intend to have a big wedding reception in November where we will invite all our friends."

Behind The Scenes: Ranbir Kapoor and Deepika…

A decade of Ranbir Kapoor

"I was evicted because I couldn't behave…

Celebrating the women on screen seen in…