Mike Tyson is making his Indian cinema debut with the most anticipated Pan India sports action film Liger starring Vijay Deverakonda and Ananya Panday and being helmed by Puri Jagannadh. The unbeatable icon, known for his intimidating ferocious demeanour and impeccable striking prowess, is playing a significant and mighty role in the film. The boxer who was shooting for the film in Los Angeles has now wrapped his portion for the film. 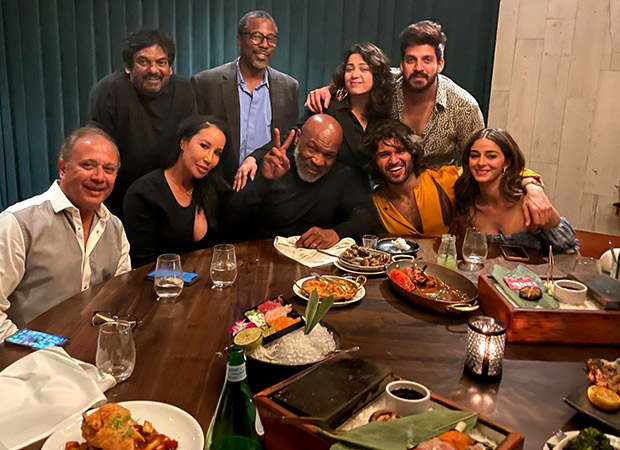 The Los Angeles schedule with Mike Tyson came to a wrap earlier today and the team had a party to mark the completion of a successful schedule. Co-producer Charmme Kaur took to her social media handle to share pictures from the wrap-up party. Tyson's wife Kiki was also at the party.

Given it is one of the biggest Pan India projects and moreover, with Mike Tyson on board, Puri Connects and Dharma Productions are making the film on a grand scale. The film has cinematography handled by Vishnu Sarma, while Kecha from Thailand is the stunt director. Puri Jagannadh, Charmme Kaur, Karan Johar, and Apoorva Mehta together are bankrolling the film.

Ramya Krishnan and Ronit Roy play prominent roles in Liger which is being made in Hindi, Telugu, Tamil, Kannada, and Malayalam languages. Liger is in the last leg of shooting and the makers are planning to release the movie in the first half of 2022.

ALSO READ: Ananya Panday gives a glimpse of her bond with Mike Tyson as they start shooting for Liger