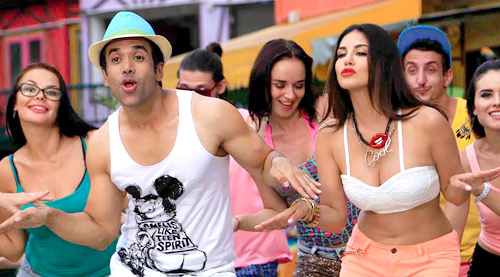 If there is one genre in Bollywood which is still waiting to be exposed, oops, explored to the fullest, it is that of sex comedies. Oh yes, there is an occasional Masti or a Kya Kool... flick that comes calling (and does well too). However, by and large Hindi film industry has played safe as far as credible names coming together to explore some fun element, a la American Pie style. Moreover, in the current times when Censor Board is showing its teeth like never before, even the handful of sex comedies could well be wondering around the eventual content that would be permitted to be unveiled on screen.

Here is looking at five upcoming sex comedies in Bollywood.

The man behind many a pun, Milap Zaveri, has taken an unabashed route by promising to unleash some more 'masti' for the audience. He goes full frontal with Sunny Leone (pun truly intended) and brings in partners-in-crime Tusshar Kapoor and Vir Das for his sex comedy Mastizaade. There was much hype generated for the film right through its shooting.

There was considerable gap between Kyaa Kool Hain Hum and Kyaa Super Kool Hain Hum. Now for third in the series, while Tusshar Kapoor stays on, Riteish Deshmukh has moved on as he wishes to take a break from sex comedies. Aftab Shivdasani has stepped in instead. Not much has been heard about it for a while now, considering current embargo on anything around sex. Let's see if this sex comedy prevails.

Current state: The film was originally slated for September 11 release. However, no promotion has begun as yet, and this date is bound to shift further

3. Sonam Nair's next for Karan Johar

She started off with a sensitive, yet light hearted affair Gippi which told the story of a girl in her mid-teens. Later, Sonam Nair decided to take a different route by getting into the sex comedy space. This isn't all as she has even managed to sell the idea to Karan Johar who has green lighted it too. For Dharma Productions, this was going to be its first ever stint with this genre.

Current state: Talk in the industry circle is that the film has been shelved at least for a while, considering resistance around sex comedies. Moreover, Karan wasn't too happy about AIB roast backlash either.

For Vir Das, being a part of a quirky comedy isn't something new. Now with Saxxx ki Dukaan.com, he is only going to up the ante further, what with producer Siddharth M. Jain making his intentions clear of going all the way as far as presenting this truly out of the box affair on screen. A sex comedy that has Vir in a double role, the film deals with a sex-toy shop in the heart of Gurgaon in Haryana!

Current state: Complete, but waiting for right time for release.

With Grand Masti entering the 100 crore club and turning out to be the only sex comedy in this elite bracket, it was but obvious that filmmaker Indra Kumar would be making his third in the series as well. While Riteish Deshmukh has made an exception to step into this sex comedy franchise, Vivek Oberoi and Aftab Shivdasani have continued without any apprehensions whatsoever.

Current state: Shooting is on in full swing. Slated for November 2015 release.